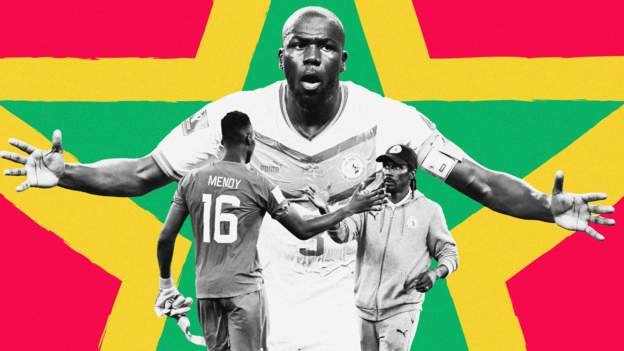 England v France. It's the World Cup quarter-final everyone is talking about. Yet, there are significant hurdles to overcome first.

Both sides may face lower-ranked opposition in their last-16 ties on Sunday but this is a World Cup that has thrown up shock result after shock result. France must first overcome Poland, while England face African champions Senegal.

They may sit 13 places lower than England in the Fifa world rankings, but Senegal have a squad packed full of talent, even without injured superstar Sadio Mane.

"We know we will be favourites in terms of rankings but Senegal will be a very dangerous side," said England manager Gareth Southgate.

"We know many of their players who play in the Premier League and throughout Europe."

Senegal are the pinnacle of African football, ranking highest of all the teams on the continent and the current holders of the prestigious Africa Cup of Nations (Afcon).

This is their third World Cup finals, having also qualified in 2002 when they reached the quarter-finals, and again in 2018 when they were knocked out in the group stages.

BBC Africa's Babacar Diarra, said: "I think the players are inspired by the 2002 generation with the head coach being former Birmingham and Portsmouth midfielder Aliou Cisse, the goalkeeper coach Tony Sylva and other former players close to the team like Lamine Diatta and El Hadji Diouf.

"So after dedicating the win in the Afcon to their elders, and the victory against Ecuador to Papa Bouba Diop, the first-ever Senegalese goal scorer in a World Cup, exactly two years after he died, we can say the spirit of 2002 is inspiring this current team.

"The qualification for the round of 16 was celebrated on Tuesday for several hours after the game. Now, there is trust in the team despite Mane's injury. Debates are going on about how to play against England and what could be their weak points."

Senegal are a nation improving on the global stage with several players now featuring regularly in Europe's top leagues, including the Premier League.

Chelsea duo Kalidou Koulibaly and Edouard Mendy and Watford's Ismaila Sarr are among those who represent the 'Lions of Teranga', while Everton's Idrissa Gueye will miss the game because of suspension.

Bayern Munich forward Mane is also not playing. He was kept in Senegal's squad despite being ruled out of the tournament with a leg injury.

"We know English people. They play strong and attack well. They have a great squad. But Senegal has a chance," former Senegal international Alassane N'Dour told BBC Sport Africa.

"A lot of Senegal players are in the Premier League or the Championship. We know about English football.

"We deserve to be here and to play this game. We have to make sure we don't go there just to watch them play. We need to take our chance."

Senegal have caused upsets before.

They famously beat defending champions France in their group in 2002, as well as Sweden in the last 16.

N'Dour, who was in the 2002 squad, said now was "Africa's time" to prove their capabilities at the World Cup.

"Africa has so many good players and talent. You cannot find a very good team without African players. We are everywhere in the top leagues," he added.

Senegal fan Ousmane, 25, told BBC Sport it would be "the best ever result" if they were to beat England on Sunday.

"What a moment [it would be] for Senegal. Everyone thinks England will win but why can't we win?" said Ousmane.

"We have good players - we can beat the mighty England. It would be a result for history. The team would be heroes. We will never forget these players if we beat England."

Amy, 23, added: "This is one of the biggest football matches I can ever remember. The reaction at home would be crazy if we win, absolutely crazy."

Who are the main men?Striker Boulaye Dia (left) and centre-backs Kalidou Koulibaly (centre) and Abdou Diallo (right) are key players for Senegal

Experienced Chelsea centre-back Koulibaly is the captain and Senegal's key man in defence. He has played in two World Cups and two Africa Cup of Nations finals with Senegal. He became the first Senegalese to lift the Afcon trophy, after beating Egypt in 2021, in which he scored the first penalty in the shootout. He also scored the winning goal in Senegal's vital group-stage victory over Ecuador on Tuesday.

Dia is a forward at Italian Serie A side Salernitana, on loan from Villarreal. He has started all three of Senegal's group matches at the World Cup and scored in the 3-1 win over Qatar. In Mane's absence, he has stepped up as the main striker and has been a handful so far in the competition.

RB Leipzig centre-back Abdou Diallo, on loan from Paris St-Germain, has built a strong partnership with Koulibaly since making his debut for Senegal in March last year. In their World Cup qualifying group, Senegal conceded just four goals in six matches. However, they are yet to keep a clean sheet in Qatar.

'Senegal have nothing to fear' - analysis

Sadly for the African Champions, England won't be facing the strongest possible version of Senegal. That will make a huge difference.

As well as the high profile absence of their star man and major attacking threat Mane, their midfield driving force Idrissa Gana Gueye will be missing due to suspension on what should've been his 100th appearance.

But without these key players, can Senegal still cause problems for England? Without a doubt.

The two full-backs who have stepped in - Youssouf Sabaly and Ismail Jakobs - have had a very good tournament so far, looking strong defensively but also offering a threat going forward.

The major attacking dangers are in the wide areas. I've always felt this Senegal team really misses a top-class number nine and goalscoring has been a problem even with Mane fit, but Boulaye Dia is proving to be a handful at this tournament.

Senegal are at their best on the front foot. When they've looked ponderous, trying to drop deep to hold on to a lead or clean sheet, such as in the second half against Ecuador, they have paid the price.

Like any international manager, Senegal's Aliou Cisse has taken some criticism since taking over in 2015 for his tactics but you can't question his record. He led them to the Africa Cup of Nations title and two World Cup qualifications - now a place in the last 16 for the first time since 2002, when he was the captain.

His calm, composed demeanour in the dressing room and the technical area seems to rub off on his players and he gives them real belief. The hangover from the awful Mane injury news has long gone, and they have been improving with every game in Qatar.

England are favourites but after a wonderful 2022 so far, Cisse and Senegal will feel they have nothing to fear.