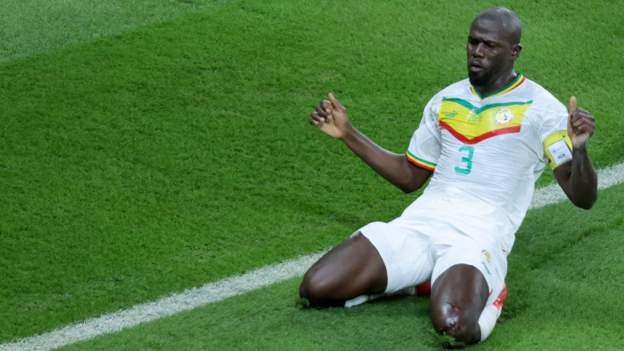 Senegal have some very talented players but the biggest weapon the African champions will have against England on Sunday is their mindset.

Aliou Cisse's side are winners, and they have crossed the line twice on two huge occasions already this year.

This team did the biggest thing they can do for their country when they beat Egypt in February to win the Africa Cup of Nations for the first time, and then they followed it up a few weeks later by beating the same opposition in their play-off to reach this World Cup.

So they have a manager who is loved, and a very confident group of players.

Whatever happens to them in this tournament now, they will still be celebrated, so they go into this last-16 tie with no fear of failure whatsoever - the pressure is all on England.

Senegal are 'dangerous' opponents for England

A team who don't rely on one superstar

I covered the Afcon for the BBC at the start of 2022 and it was really interesting to follow the tournament and understand the dynamics of the different African teams.

I spoke a lot to Yaya Toure and his brother Kolo, who used to play for the Ivory Coast, and former Arsenal right-back Lauren, who is from Cameroon.

They explained that some of the traditionally strong teams, like Ivory Coast or Nigeria, struggled against the north African sides like Egypt, Morocco or Tunisia, because they did not have the same organisation and were more reliant on good individuals on the pitch.

To win things, you need that team ethic - you have to become an organised side is that is less reliant on one superstar and more reliant on the group.

Senegal have clearly done that. Yes, they would be stronger if Bayern Munich's former Liverpool star Sadio Mane had been fit to play in Qatar, and Everton midfielder Idrissa Gueye's suspension for this game is a blow to them, but they have got players who can step up.

Look down the spine of their team, starting with Eduoard Mendy in goal and his Chelsea team-mate Kalidou Koulibaly at the heart of their defence, and they have got quality and experience.

I still think England will dominate the game, and have a lot more possession, but I see Senegal as a much bigger threat than anyone we have faced so far at this tournament.

The United States were dangerous because we didn't play very well whereas this Senegal team will not just look to frustrate England like Iran and Wales did, they can also cause Gareth Southgate's side problems on the counter-attack.

Will Southgate revert to type?World Cup 2022: Phil Foden on being himself and squad competition

England have to focus on themselves and remember they put in a really positive performance against Wales. One of the things Senegal will definitely be talking about is how to stop all of our talented players, and Gareth Southgate has to keep this momentum going.

I feel like we have to get up speed now anyway, because France are probably up next in the quarter-finals if we do get through this game. That kind of allowance we had in the group stage of being able to have a bad game or even a bad half is over now we are into the knockout rounds.

We are a good enough team to bounce back from a bad first 45 minutes, especially with the options we will have on the bench, but I'd much rather we started this game like we started the second half against Wales - by trying to blow them away from the first minute.

That is what I want to see but as pundits we are torn between the prediction of what is going to happen, and what we would like to do.

Personally, I'd get Phil Foden in the team instead of Mason Mount, because I don't see what he does that Foden can't. Yes, he tracks back - but so does Foden.

And I feel like he really has to play Marcus Rashford because, just looking at him, he is razor sharp and will strike fear into any team.

I am not so sure Southgate will see things the same way, though - this could be the game where he reverts to type.

I feel like he is more likely to see Rashford and Foden as game-changers from the bench and go back to the team he started the tournament with.

Graphic showing the England team which started against Iran and the United States that Jenas expects Southgate to pick to face Senegal. The BBC pundit would choose Kyle Walker instead of Kieran Trippier at the right-back, have Marcus Rashford on the right wing ahead of Raheem Sterling and put Phil Foden in the middle in place of Mason Mount

There is an argument for including Raheem Sterling because he has got tournament pedigree and 80-odd caps, and we are at the stage of this World Cup where you need that experience.

So I would not blame Southgate for doing that but I just think we have got a lot of players who are in good form, so why not let them go and play - and Rashford and Foden are two of them.

Jermaine Jenas was speaking to Chris Bevan in Doha.