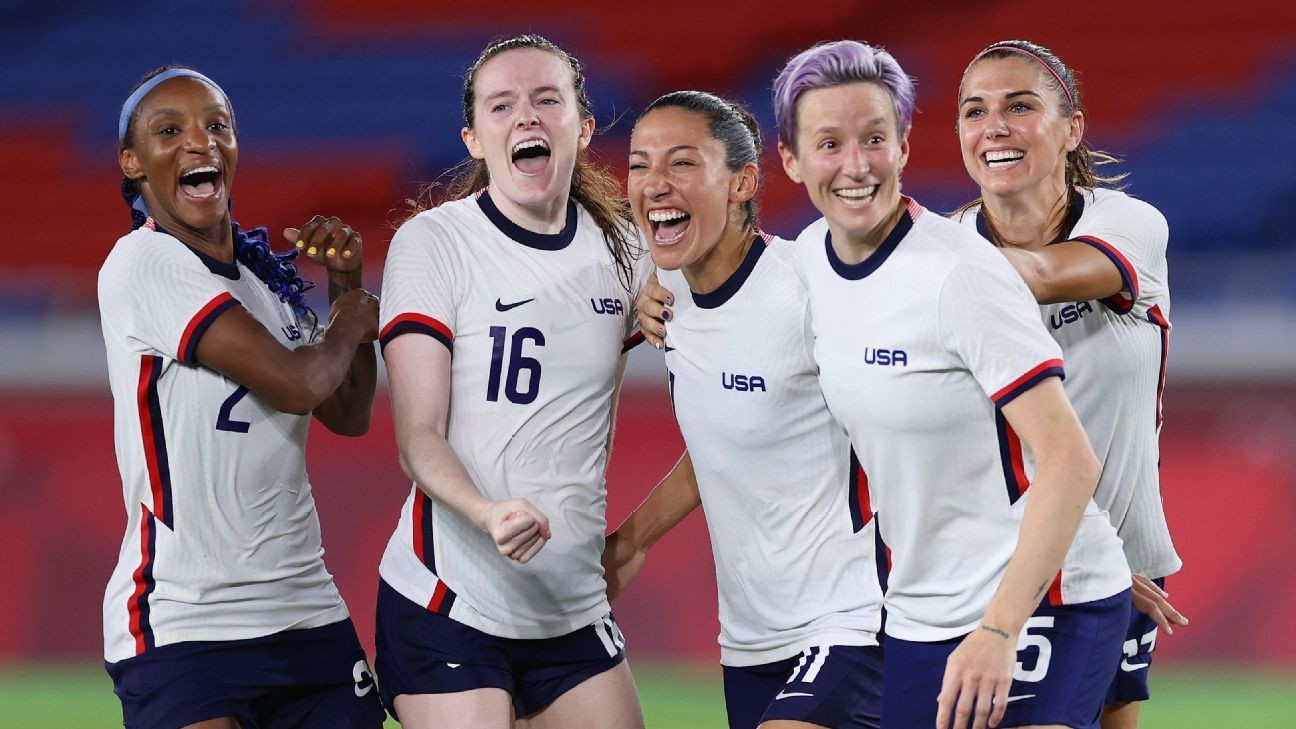 After the U.S. women's national team eked past the Netherlands, the reigning champions of Europe, following a grueling 120-minute slug-fest and penalty shootout, it would be tempting to see Monday's semifinal against Canada (4 a.m. ET) as a chance to take things easier. After getting clobbered by Sweden and landing in arguably the toughest quarterfinal of the Tokyo Olympics, Canada is the USWNT's reward, right?

"This is probably going to be our hardest game: we know that, and we are preparing for it that way," U.S. coach Vlatko Andonovski said Sunday. "It's a semifinal -- it's four of the best teams in the world," he added. "Regardless of who plays who, it will be a difficult game."

Whether Andonovski really feels that way deep down or not -- cynics will surely doubt it -- the U.S. ought to know better than to write Canada off. Here is a look at the history of these two teams, and why Monday's semifinal could be an explosive one:

The USWNT dug deep to be the fancied Dutch in the quarterfinal, but there are no easy games at the Olympics and Canada will be no different. Laurence Griffiths/Getty ImagesCould this be another Olympic classic?

It would be difficult to top the excitement of the USWNT's quarterfinal match over the Netherlands, but the semifinal against Canada surely has the potential, especially considering what happened the last time these two sides faced off in an Olympics.

If you've never seen the 2012 Olympic semifinal, then do yourself a favor and avoid spoilers, set aside two-and-a-half hours, and go watch it. If you need your memory jogged: that was the wild back-and-forth shootout where Christine Sinclair scored a hat-trick and the USWNT somehow came back three times to win 4-3. Alex Morgan scored the game-winner at the last possible moment in the 123rd minute.

That match holds firm as a testament to the USWNT's tenacity and never-say-die attitude, but it's also the moment where Canada asserted itself as a top-tier team on the global stage. At the time, it was a bit of a shock to see the Canadians giving the Americans such a battle, but the Canadians earned a bronze medal in 2012, and then earned bronze again in 2016.

"In 2012, we were kind of on a hope and on a prayer," Canadian veteran Desiree Scott said Sunday. "We were hoping we could get to that match, but now we truly believe in ourselves and what we can do on a soccer pitch, and we believe we can get to that gold medal game."

What is perhaps most memorable about that 2012 semifinal at Old Trafford is the way Abby Wambach loudly counted into the ear of the Norwegian referee every time Canada's goalkeeper, Erin McLeod, held the ball. After McLeod had been warned about time-wasting at halftime -- there is a six-second limit on goalkeepers holding the ball that referees almost never enforce -- Wambach counted to 10 and the referee blew her whistle, awarding an indirect free kick at the spot McLeod was standing. On the unusually close free-kick inside the box, the referee then called a Canadian defender for a handball, allowing Wambach to score a crucial penalty.

As far as USWNT wins go, it was a messy one, but it was thanks in large part due to the gamesmanship and shamelessness of Wambach to needle the referee. That ref has never officiated in another major tournament since, but does the USWNT have another player like Wambach, willing to be a pest and do whatever it takes to win?

The players have credited defender Kelley O'Hara as being the one who brings out the most aggression on the field -- "I think we could all hear her voice the whole game," Rose Lavelle said, as if she was putting it as politely as she could, after the U.S. beat New Zealand. O'Hara was also the one who gave a post-Sweden pep talk about being "absolutely ruthless" going forward.

Then there's Megan Rapinoe. Given her performances so far in Japan, it seems unlikely she will reprise her heroic role from 2012, but maybe she'll dazzle for old time's sake.

The U.S. win over Canada in the 2012 Olympic semifinals was an epic, seven-goal thriller that pushed the USWNT to the limit. Expect Monday's game to do the same. Stuart Franklin - FIFA/FIFA via Getty Images

The flagship game of Rapinoe's career will surely be the quarterfinal against France at the 2019 Women's World Cup -- when the president of the United States tries to pick a fight with you and you then score two goals to shut him up, it's hard to argue otherwise -- but her 2012 Olympic semifinal against Canada is runner-up. She scored a pair of sensational goals, including an olimpico (at an Olympics!), and was an all-around menace to Canada.

Another unforgettable aspect of that game? Canada's brutal physicality, which included a pre-VAR incident of Melissa Tancredi stomping on Carli Lloyd's head after she got taken out on a set piece.

Canada's game plan was pretty clear: do everything possible to disrupt the USWNT so they get frustrated and can't get into an attacking rhythm. Monday's semifinal will probably be a bruising affair again, but Canada is also plenty capable of bringing some extra sophistication.

"Our team is completely different now," Scott said compared to 2012. "We've developed as a program and the brand of soccer that we play has evolved. Now we're an attacking threat: we're not just that defensive Canadian grit."

Ali Krieger reacts to Vlatko Andonovski's decision to start Lynn Williams as the USWNT advances to the semifinals at the Olympics.

The one-sided rivalry due for a revival

The thing about that previous USA-Canada game is that it was the first time in the past 20 years the North American rivalry between these two teams has really felt real. That's because Canada hasn't beaten the United States since 2001. In their last 36 meetings, the USWNT won 30 of them and tied in six.

As far as Canadians are concerned, the USWNT's win at the 2012 Olympics deserves an asterisk because of the bizarre refereeing, and they are right. But at times it's felt like optimism has fueled the rivalry. To wit, after Canada lost to the U.S. in 2019 Women's World Cup qualifying, then-coach Kenneth Heiner-Møller was asked what it would take to close the gap with the Americans. His answer? "There is no gap." He offered no further explanation.

Ever since 2012, however, Canada has been firmly on the rise. In addition to their bronze medals at the last two Olympics, they reached the quarterfinals of the 2015 World Cup and the knockout stage of the 2019 edition after back-to-back group stage exits before that. Even if Canada covets the rivalry a bit more than the Americans do, it doesn't matter -- if one team plays like it's a rivalry, the other one will have to follow suit.

"It's easy to get up for it because of the rivalry," USWNT defender Casey Krueger said Sunday. "We know that they are going to bring their best and we have to do the same."

Although the Americans have comfortably had the upper hand in this rivalry and are the favorites heading into Monday's semifinal, tournament soccer is often different, and Canada in particular has seemed to learn how to step it up on the world stage. The USWNT has played Canada more than any other team in history, and while that could be an advantage for the U.S., it's certainly an advantage for the Canadians too.

Canada's coach, Bev Priestman, said that she, a non-Canadian, is more motivated by the last time the U.S. faced her team. In February, the U.S. barely eked out a 1-0 win after a tight match in which Canada did well to cut off the Americans' chances for most of the game.

"I do see the same opportunities available that we'd seen in February, so I'm excited," Priestman said. "We have some freshness in areas where they don't, which is critical in a game like this. The Canadian-U.S. rivalry is there -- I don't need to even talk about it, it's a given. But more importantly, when you talk about having a strong vision and that driving everything, this is the game that changes the color of the medal."

Sinclair, left, is the key to everything Canada do, even if she's not scoring the goals. (Though she's usually doing that as well.) Koki Nagahama/Getty ImagesA storybook ending for Christine Sinclair?

There's one more thing that stands out about that 2012 semifinal, and it's the sheer brilliance of Christine Sinclair. She put the Canadian team on her back, scoring three goals while the supporting cast around her wasn't nearly as talented.

That's still a bit of a future worry for this Canada team: once 38-year-old Sinclair retires, will the goals still come as often? The team does have quality attackers in Janine Beckie and Nichelle Prince, with fullbacks Ashley Lawrence and Alysha Chapman also adding attacking threat when they bomb forward. But Sinclair is irreplaceable.

No man or no woman has scored more international goals on the planet than Christine Sinclair, who now boasts 187 goals for Canada. (She's also two shy of tying Christiane's record for the most goals in women's Olympic play.) But crucially, Sinclair isn't just a goal-scorer -- she is the glue of the attack. It's easy to see in Portland, where she plays for the Thorns, in the middle of the field: her vision for distribution is impeccable, she's excellent at keeping possession in transition, and she sets up her teammates as much as she scores herself.

The USWNT will need to limit Sinclair's impact, in whatever form it comes. If not, Sinclair, who may be playing in her last Olympics, could be playing for a gold medal to cap off her international career.