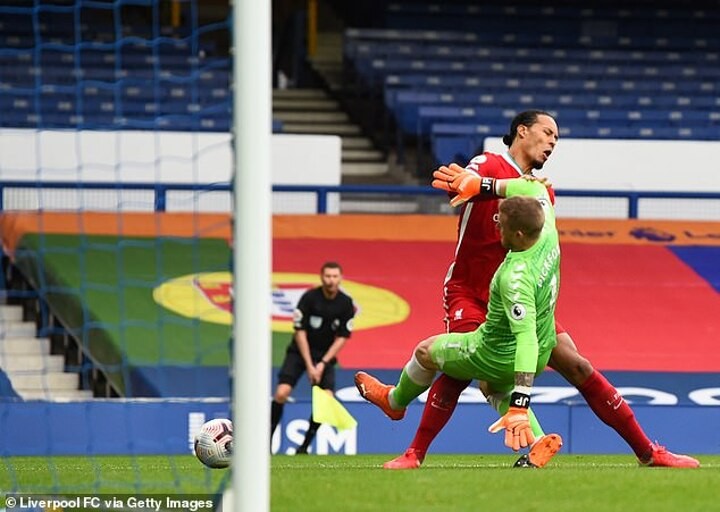 A thrilling Merseyside derby was spoiled by two huge interventions by VAR.

Everton keeper Jordan Pickford inexplicably avoided a red card after a horror challenge on Virgil van Dijk before Jordan Henderson was denied an injury-time winner - ruled out for a marginal offside despite Sadio Mane appearing level with the last defender.

Here, Sportsmail takes a look at both decisions and uncovers why VAR is simply not fit for purpose.

Jordan Pickford wipes out Virgil van Dijk with a shocking challenge but gets away scot-free, while the Liverpool defender faces a serious injury lay-off.

It is a poor challenge by Pickford. Van Dijk is just offside in the build-up so it can’t be a penalty but it could have been a red card even though the ball was out of play when the incident occurred.

Had he seen red I wouldn’t have been surprised but the facts are that VAR, David Coote, will have checked to see if referee Michael Oliver had made a clear and obvious error, and decided that he hadn’t. And that’s critical.

VAR obviously agreed that the challenge was more reckless than serious foul play or violent conduct, and that would carry a yellow-card sanction rather than red. So, since VAR can only deal with red cards, not yellows, he wouldn’t have advised Oliver to go to the review area.

Henderson thinks he’s won the game for Liverpool only for Mane to be judged offside by a fraction following a lengthy VAR review.

'It’s getting harder and harder to take it. I come in the dressing room, people stand there with a laptop, we watch the situation back and we don’t understand why this was offside.

'Look, I’m a real supporter of VAR but what you expect with offside is the right decision. The picture I saw, there’s no armpit, there’s nothing. Just not offside. I had 10 interviews and everyone tells me it was not offside.'

We told you so!

Liverpool’s winning goal was ruled out for the most marginal offside against Sadio Mane - but there is still no way the VAR could have known for certain.

Sportsmail revealed in August last year that the frame rate of the broadcast cameras used by VAR, which run at 50 frames per second, is not good enough to rule on such marginal decisions.

The VAR must take the frame which proves the ball has definitely been struck but the exact moment of contact, from which offside should be ruled, often comes somewhere between the two.

Players can move up to 20cm between frames when running at full speed. Mane was moving much slower but as he and the defender were both moving as Thiago went to play the ball, there is no way VAR can be sure the frame used to judge the offside had the players in their actual positions at the point the ball was played.