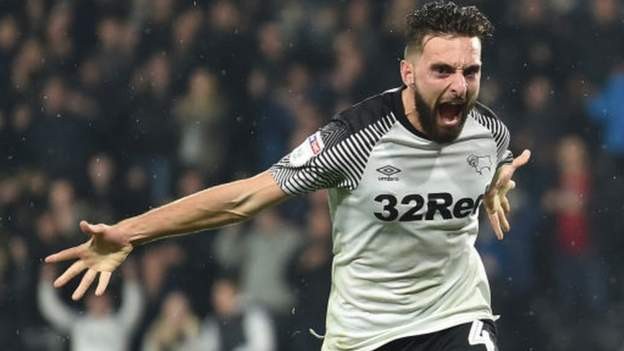 Derby say that they have "come to an agreement" on an undisclosed fee with the Latics for the 30-year-old, capped six times by Scotland.

Shinnie had six months left on the three-year deal he signed when Frank Lampard signed him for Derby in 2019.

He is the second player to depart Derby this weekend, after Phil Jagielka.

Shinnie on his first year at Derby

Former Aberdeen and Inverness man Shinnie leaves troubled Derby second from bottom in the Championship to join a Wigan side lying fourth in League One, four points behind leaders Wycombe Wanderers, but with five games in hand.

"Derby wish to thank Graeme for his commitment and dedication whilst representing the club," said a Rams statement.

Shinnie has made 92 appearances for Derby since being signed in the summer of 2019, just a few weeks before Lampard left to join Chelsea - and he leaves at a time when another Rams boss is being linked with a move to the Premier League.

His elder brother Andrew Shinnie, who played in the Football League with Birmingham City, Luton Town and Charlton Athletic, is now back playing in Scotland with Livingston.