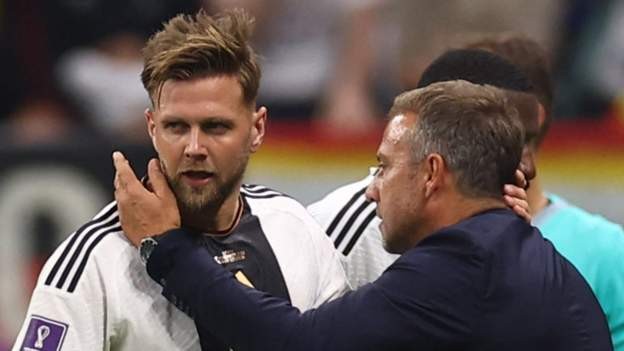 Werder Bremen striker Niclas Fullkrug, at 29, was the oldest outfield player to make his Germany debut for 20 years when he scored as they beat Oman in their only warm-up game before the start of their World Cup campaign.

Germany's spirits had been lifted by Costa Rica's shock win against Japan, which meant defeat by Spain at Al Bayt Stadium would not automatically mean elimination. Fullkrug's goal to give them a 1-1 draw proved important both in the context of the World Cup and psychologically.

Fullkrug made his entrance as a substitute, replacing Thomas Muller with 20 minutes left with Spain leading 1-0 through Alvaro Morata's brilliant flicked finish eight minutes earlier. That result would have confirmed their qualification for the last 16.

Something of a throwback with a bustling physical style that has caused him problems with knee injuries in the past, Fullkrug made his mark in the 83rd minute when he forced his way into the area before thrashing a no-nonsense finish high past Spain keeper Unai Simon.

Flick took something of a punt on the striker after injuries to RB Leipzig's Timo Werner and Lukas Nmecha of Wolfsburg. Selecting a 26-man squad allowed him room for manoeuvre and he included Fullkrug, who was outstanding in Werder Bremen's promotion last season when he scored 19 goals and already has 10 goals this season.

Spain have proved a nemesis of Germany's over many years and it looked like the 2014 World Cup winners were slipping to another defeat which would have added even more tension to these final group games but Flick's gut feeling that Fullkrug is a player who can do a job for him at this level is proving sure.

The result still means Germany must beat Costa Rica on Thursday in their final game but it also means, significantly, that Spain still need a result against Japan. This closes down the prospect of coach Luis Enrique being able to rest players for the knockout phase, which might have opened the door a little wider for Japan.

The big losers in Group E on Sunday were Japan, who were left deflated after that shock loss to Costa Rica, a desperate comedown after their landmark win against Germany.

Germany, for their part, showed great powers of recovery and resilience to bounce back from the damage caused by that loss to deserve a point in an entertaining game.

They may not have been as easy on the eye as Spain, who moved the ball around sweetly in their trademark fashion, but Germany had plenty of quality and threat of their own and they were able to give their opponents some nervous moments in defence. Few could complain at the draw they earned from a finish that was heading for the top of the net once it left Fullkrug's boot.

Indeed, Flick's substitutions almost brought the ultimate reward in the final seconds when Leroy Sane burst clear but just when the ideal moment presented itself to shoot at the unprotected Simon he hesitated and the chance was lost.

Germany will now feel a measure of equilibrium has been restored to a World Cup campaign that suffered shockwaves when they lost to Japan.

Flick and his players, with confidence higher, will now back themselves to beat Costa Rica and then hope Japan do not shock Spain. On that basis, the odds suggest they will pull through having had that major scare.

In reality, this is nowhere near a vintage Germany team. They won all of their first eight matches under Flick but only two of their past 10. In recent major tournaments, they did not get out of the group stage at the 2018 World Cup and lost to England at Wembley in the last 16 at Euro 2020.

Even their former coach and 1990 World Cup winner Jurgen Klinsmann does not see them lifting the trophy at Lusail Stadium on 18 December.

For now, however, Germany are still in this World Cup and have a chance of staying in it beyond Thursday. History tells us that this alone is a warning not to take them lightly.