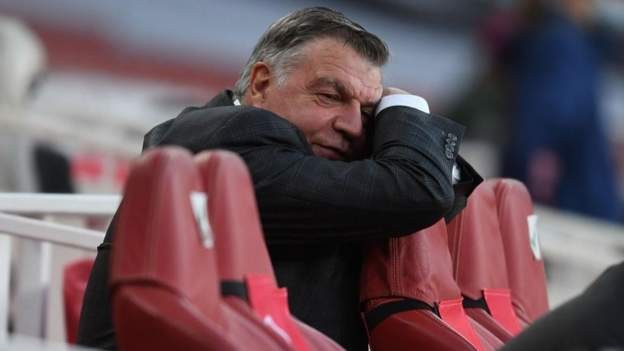 Arsenal 3-1 West Brom: 'The inevitable has happened' - Allardyce on relegation

West Bromwich Albion boss Sam Allardyce says "words cannot describe" how much it hurts to suffer his first relegation from the Premier League.

Defeat at Arsenal on Sunday confirmed the Baggies will be heading back to the Championship, sitting 10 points from safety with three games to play.

But whether the 66-year-old will lead their bid to be promoted straight back to the top flight remains unclear.

He said afterwards it is "too early to consider or talk about" his future.

"I am not going to answer a question on whether I am staying or going - it will just be a waste of time because I won't be saying," he said.

The former England manager added: "It would depend on what is decided when figures are set. At this moment I have no idea what the figures are or aren't.

"At this moment to think about it after the disappointment, it is not a question I am prepared to answer."

But he was unable to change the club's fortunes and they join Norwich City as the only side to be relegated from the Premier League five times.

"It is painful. I wanted it [survival] for the club and players more than me, but it hasn't happened," he told Match of the Day. "Everyone has to accept it and recover quickly."

He said the main objective now is to finish the season "with pride in performances and professionalism".

"I want to win all three games but if I could choose just one, it would be West Ham because the fans will be there," said Allardyce.

"I have often thought what home fans might have done. I think they might have been the extra man and lifted us to win some of those draws at the Hawthorns."

Sam Allardyce has been consistent in his messaging around whether he will commit to remaining at West Brom if they got relegated.

He is open to it - but, in his words, he doesn't want to be 'messing around'. In other words, if the Baggies are prepared to fund a promotion drive, he will stay.

The problem is, most of the key figures in the Baggies' recent improvement joined on loan in January and keeping them is not straightforward.

England's Ainsley Maitland-Niles is unlikely to be too keen on a season in the Championship for a start.

Goalkeeper Sam Johnstone and playmaker Matheus Pereira will have their suitors this summer too - and this will not be a seller's market.

West Brom have existed without owner funding for quite a while, so parachute payments and transfer deals will provide the basis of their revenue next season.

Allardyce needs to decide whether that will be enough - at 66, a 46-game Championship campaign is not something to commit to lightly, even if Norwich and Watford proved this season it is one that can be successfully navigated with an immediate return to the Premier League.