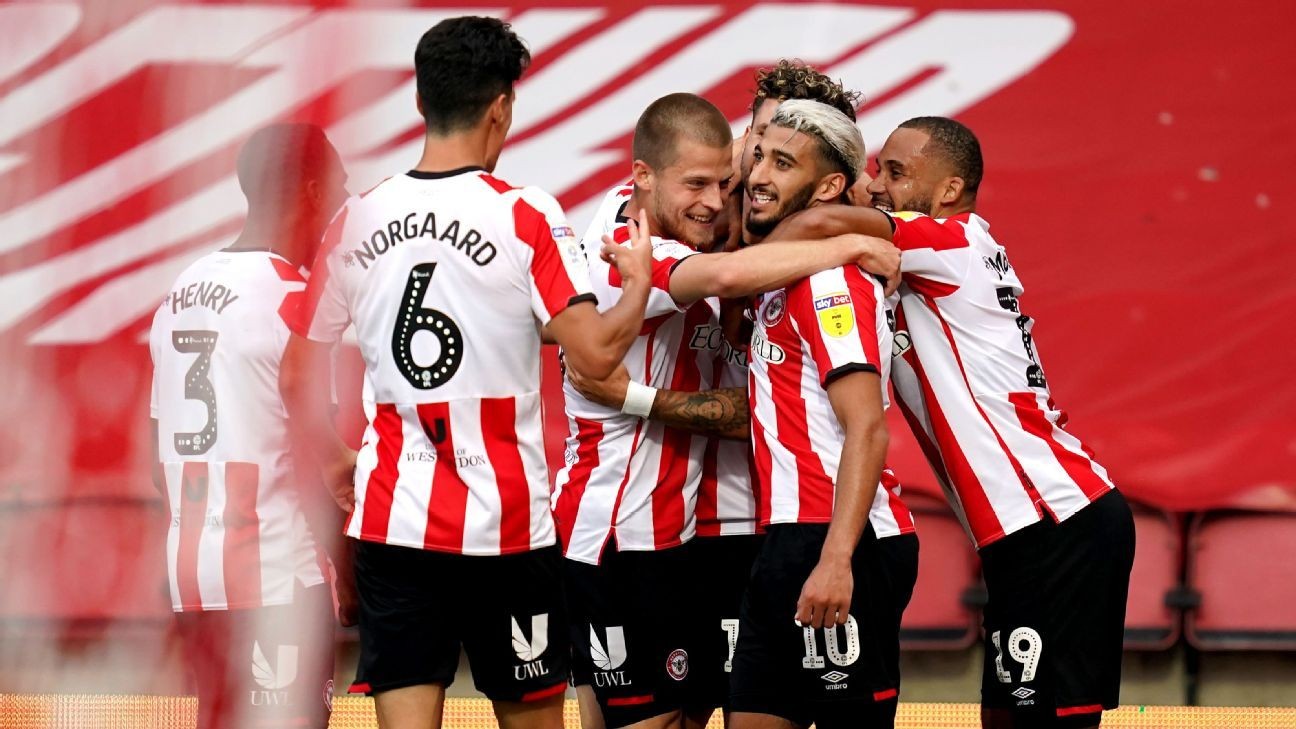 At the halfway point of the five-mile journey between Brentford's Griffin Park from Fulham's Craven Cottage is Fuller's Brewery, home of their flagship beer London Pride. But there's far more than just local bragging rights on the line when these fierce rivals meet at Wembley on Tuesday.

The winner of the Championship playoff final -- stream LIVE on ESPN+, Tuesday, 2.45 p.m. ET, in the U.S. -- gets the key to unparalleled riches in the Premier League; football experts estimate a cash injection for the winner to the tune of £170m, thanks to increased broadcasting revenue and then guaranteed parachute payments if a team gets relegated.

Brentford close on Premier League dream -- just don't call it 'Moneyball'Leeds United are back in the Premier League: How one of England's biggest clubs returned after 16-year absenceMLS is Back Tournament: What it's really been like after one month inside the bubble

No wonder the match is dubbed "the richest game in football," one that can change the fortunes of either club.

But while Tuesday's final will be played out on the world stage, as Brentford and Fulham aim to become the third team from the Championship to join Leeds and West Bromwich Albion in getting into the 2020-21 Premier League, theirs is also a well-known, local rivalry. And there was nothing to separate them in the final standings, equal on points after 46 games, with only goal difference seeing Brentford finish third above Fulham in fourth.

There's little love lost between the two sets of fans and they live, in footballing terms, on each other's doorstep. Brentford and Fulham are both fine, old traditional clubs, living in the shadow of Arsenal, Tottenham or Chelsea, but do not for one minute mistake it for a lack of ambition on their part. Both teams (and their fans) believe they're ready for the Premier League and while Fulham are looking to bounce back to the Premier League having been relegated last season while Brentford are looking to be back in the top flight for the first time in 73 years.

Here's everything you need to know about Tuesday's winner-take-all match at Wembley.

Jump to: Their seasons so far | Comparing managers | Where game will be won/lost | Players to watch | Prediction

What's the story of their season so far?

Brentford should already be on a socially distanced beach somewhere and toasting promotion, having had two chances to secure automatic promotion but losing both matches.

With two matches left in the season, Brentford were hot on WBA's heels, but missed their opportunities with stunning defeats to Stoke and then Barnsley. The Barnsley defeat at their Griffin Park home was a particularly galling experience, and after falling 1-0 at Swansea in the first leg of their playoff final, it looked like the wheels might have fallen off Brentford's season when it mattered most. But on Tuesday night, in the final game before they head to their new 18,000 capacity Community Stadium a mile down the road from Griffin Park, they bounced back and harnessed the emotional wave of energy around their old home to win 3-1 with their front three of Ollie Watkins, Saïd Benrahma and Bryan Mbeumo all superb. They've played thrilling football all season and are worthy playoff finalists.

Brentford should have locked up automatic promotion but late-season defeats put them in the playoff, where they've since regained the form that got them this far. John Walton/PA Images via Getty Images

Fulham struggled in the early matches back after the league restarted, but their 2-1 win at neighbours QPR breathed life back into their promotion push. They've had to adjust to life without star striker Aleksandar Mitrovic, who missed three matches due to suspension and then the playoff semifinals with a hamstring injury, but they've rallied, with Bobby Decordova-Reid doing a superb job up front.

Their season has been pragmatic, and fourth place was about the right return for a campaign that's thrilled on occasion -- their 23 league wins from 46 games was third only to Leeds and Brentford -- but also stuttered at others. They also had to cope with two players testing positive for COVID-19 back in May, but like Brentford, they're taking strides forward off the pitch with the Riverside Stand going massive redevelopment and they are certainly gearing themselves towards being an established Premier League side.

In the playoffs they showed the two sides of their season; they won impressively at Cardiff 2-0, with two glorious goals, but then stuttered at home to lose the return leg 2-1. Their reaction at the full-time whistle was markedly different to their playoff final opponents: Brentford were ecstatic after beating Swansea, while Fulham were more subdued.

What about the managers?

Danish manager Thomas Frank took over from the popular Dean Smith (who joined Aston Villa) in October 2018 and retained the support of the board despite a slow start in which he won just one out of his first 10 matches. Brentford started this season slowly too, winning one of their first six, but grew into the campaign.

They play an attractive, ruthless brand of football - now in a 4-1-2-3 - where they look to shift the ball forward as quickly as possible to their lethal front three, nicknamed BMW (Benrahma, Mbeumo and Watkins). They press high, hustle and keep on attacking, reluctant to ever settle on a lead. Frank is more agitated than Parker on the touchline, usually chewing gum, clutching his ring-bound notepad and even got a yellow card in the playoff semifinal second leg, but through their contrasting styles they have done brilliant jobs to secure a spot in the playoff final.

Scott Parker, the ex-England midfielder, took charge of Fulham midway through their ill-fated Premier League journey in 2018-19 and though he failed to steer them away from the drop, the club kept their faith in him. Speaking before their second leg defeat to Cardiff, Parker said the team he took over back in Feb. 2019 was a "real mess" but also pointed towards the progression they have made as a group both in terms of how they are playing and their mentality.

Parker's calm presence is reflective in Fulham's style of playing. They stick to a 4-1-4-1 formation, with Harrison Reed anchoring the team in front of the back four, and play with a patient style. They can frustrate opponents and their pragmatic style can prompt opportunities to attack through the impressive Mitrovic or Decordova-Reid.

Where will the game be won and lost?

Fulham will likely look to frustrate Brentford, just like they did against Cardiff in the final 30 minutes of their second leg -- they sat back, looked for opportunities to counter and kept opposition chances to a minimum. Brentford will have to cut their passing lanes, too; Fulham have the best pass completion rate in the Championship (83.2%) and have had the most touches of the ball (34,965, nearly 2,000 more than Brentford).

Brentford's main challenge will be breaking down Fulham and not throwing too many men forward, wary of being hit on the counter, but when they click, they're superb. They scored the most goals in the Championship during the regular season (83, 16 more than Fulham) and led the way on expected assists (57.17). It's a given that they'll create good scoring chances. Brentford's intensity does leave spells in the game in which their tempo ebbs and flows, so they will need to keep their concentration levels sharp all match.

The set piece battle will also be fascinating. Fulham looked vulnerable to long throws and corners against Cardiff, and Brentford will look to exploit that. On the flip side, Fulham will hope for more defensive lapses like Brentford showed in the goal they conceded to Swansea on Wednesday.

Fulham manager Scott Parker has brought a sense of pragmatism and order to his team, something they'll need against a high-octane Brentford side. Nick Potts/PA Images via Getty ImagesWhich players should you keep an eye on?

Fulham have the superb Tom Cairney captaining their team while Reed, on loan from Southampton, has been outstanding. They will be keeping everything crossed that star striker Mitrovic is fit for Tuesday -- he tops the Championship goal-scoring charts this season with 26, alongside Brentford's Watkins -- but if he isn't available, the attention will be on Decordova-Reid to deliver up front. But for Fulham, their key man is at the back, with goalkeeper Marek Rodák outstanding at the back after he came in for Marcus Bettinelli back in November. He's a superb shot-stopper and will be called into action on numerous occasions Tuesday.

Brentford's much-admired front-three will be tasked with breaking down Fulham's defence and guiding them through to the Premier League. Their leftback Rico Henry is available after having his red card overturned in the first leg of the playoff semifinal, and he will be key come Tuesday as will their brilliant goalkeeper David Raya. But it's all about that front three.

Mbeumo's goal against Swansea will give him plenty of confidence after a slow return to form post-lockdown, while Benrahma (top of the Championship standings for xA on 11.85) will be box office and attract plenty of attention from Fulham's defenders. But if Watkins up front is firing like he has been all season -- his work rate against Swansea was off the charts, even chasing back in the closing stages to make a key tackle -- then Brentford fans will back him to book their ticket to the top tier.

Flip a coin. We'd love to sit on the fence here, but if we were forced to pick then we'd have to go with Brentford... just. One way or another, beer will be flowing in west London on Tuesday night.

With additional reporting by David Cartlidge