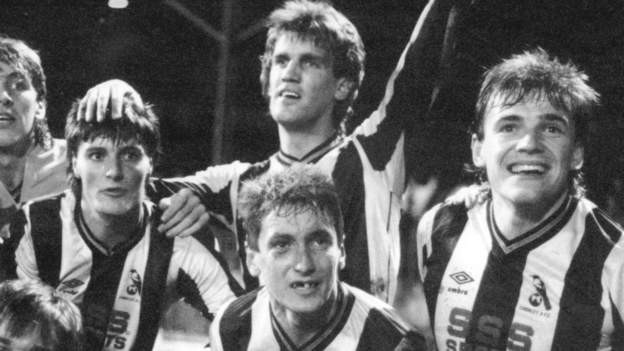 "Mention Chorley and it'll send a shudder down the spines of a generation of fans," says life-long Wolverhampton Wanderers supporter Russ Evers.

Despite a poor run of form, an FA Cup tie against opponents from the sixth tier of English football ought to be relatively straightforward for Wolves.

But there is history between Chorley, the last non-league club standing in this season's competition, and their Premier League opponents, who meet in the fourth round at Victory Park on Friday.

One of the most famous names in English football were back page news after a 3-0 defeat by Chorley's £25-a-week players on 24 November 1986.

Regarded as one of the greatest results in the Lancashire part-timers' history, the FA Cup first round second-replay loss is remembered by seasoned Wolves followers as the day their club, league champions three times in the 1950s, hit rock bottom.

"Wolves were looking into the abyss," recalls David Instone, who has covered the club for more than three decades.

As Chorley and Wolves prepare to meet again, this is the story of what happened that remarkable Monday night 35-years-ago, told by those who were there.

While Wolves can call on the services of Euro 2016 winner Joao Moutinho and £35.6m club-record signing Fabio Silva at Chorley, they were living a hand-to-mouth existence in 1986.

Having dropped into the old Fourth Division after three successive relegations, they were on their knees financially.

Seven years after paying Aston Villa a British record £1.49m for striker Andy Gray in 1979, they had Andy Mutch,external-link a £5,000 signing from Southport, up front, while only two sides of Molineux were open to fans, with gates down to 4,000.

"We had no money to pay the milk bill and there were cockroaches in the dressing rooms," adds Evers, who was among 750 Wolves fans at Burnden Park, Bolton's old ground, for the darkest chapter in the club's history.

It was Wolves' third meeting in nine days with Northern Premier League Chorley after the first match, moved from the Magpies' home to nearby Bolton on police advice, ended 1-1 before a similar outcome, after extra-time, in the replay at Molineux.

Chorley won the coin toss to decide the venue for the second replay so it was back to Burnden Park, with a tie against Preston the prize for the winners.

Two goals by Charlie Cooper, who played snooker with then-Preston defender Sam Allardyce, and another by Mark Edwards teed up a Lancashire derby in the second round.

"It was ridiculously comfortable. I had little to do," Ian Senior, Chorley's goalkeeper that night, recalls.

"Wolves had fallen on hard times but they were still a famous name. There was a lot of excitement in the town when we put on Ceefax and found out we'd been drawn against them."

Instone, covering the match for the Wolverhampton-based Express & Star newspaper,external-link says Wolves were "hopeless", adding: "Whatever had gone on before with the three successive relegations, losing 3-0 to a team of part-timers in the FA Cup, you couldn't get lower than that."

With the four-time FA Cup winners humiliated, fans turned on manager Graham Turner, who was seven weeks into the job.

"I remember fans starting a chant that Turner must go," says Evers. "I thought 'he's only just got here'."

Turner took immediate action after the game and winger Keith Lockhart did not play for the club again.

"He went home to Cambridge with his girlfriend and never returned," Matt Forman, scorer of Wolves' goal in the replay at Molineux, tells the Wolves Heroes website.external-link

The Birmingham Evening Mail captured the mood with a cartoon of a coffin with a wolf inside, while the Express & Star had quotes from the manager blaming "five years of mismanagement" for the club's predicament.

Evers remembers a conversation on the trip back to the Black Country on a supporters' coach.

"Fans were asking 'where's Bath?' because we thought we'd be playing them in the Conference. There seemed only one way out of the Fourth Division - and that was relegation."

Wolves were facing the bleakest of futures but sat in the directors' box at Burnden Park was a new signing from West Brom reserves. Ineligible to face Chorley, Steve Bull would go on to revive the club's fortunes by becoming Wolves' all-time top scorer with 306 goals from his 561 games.

"Wolves had an end-of-life feel about them," adds Instone. "Bully provided the kiss of life."

New signing Steve Bull, who went on to play for England, was at Burnden Park for Wolves' defeat by Chorley but could not play because he was ineligible'We're going to war'

Chorley's dressing-room celebrations during this season's FA Cup run have gone viral on social media, with a video of the team singing Adele's hit song 'Someone Like You'external-link viewed 8.3m times on Twitter since beating Derby in the third round.

Their 1986 heroes also knew how to celebrate.

Chorley chairman Ken Wright was manager 35 years ago and he remembers the team partying long into the night after seeing off Wolves at the third attempt.

"I worked for a Ford dealership in Manchester and my boss had a house in Bolton with a disco in the basement," adds the 76-year-old. "It was back to his house. The lads cleared him out of drink."

Black and white photographs in Chorley's boardroom are a reminder of a famous win.

"We had some strong characters in the dressing room - Phil Marsden and Paul Moss - who would stand up before we went out to play and shout 'we're going to war'," says Wright.

Senior recalls players receiving a £120 bonus after sending Wolves packing - nearly five times their weekly wage - while Forman is frequently reminded about the most embarrassing episode in Wolves' history.

"The funny thing is that my sister Clare now lives in Chorley. That Lancashire town will always be embedded in my brain," he says.

Having beaten EFL clubs Wigan Athletic,Peterborough United and Derby County, National League North Chorley - who started at the second qualifying round stage - are enjoying their best ever run in the FA Cup.

Beat a Wolves team reeling from a 3-2 home defeat by Black Country rivals West Brom and they will be adding more pictures to the boardroom wall at Victory Park.