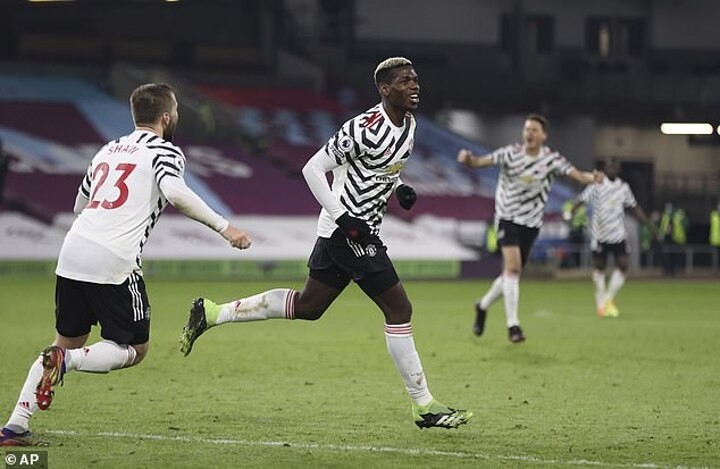 Probably for the first time this season, Paul Pogba has handed Ole Gunnar Solskjaer a headache he does not mind having to deal with.

The French midfielder capped a fine display against Burnley on Tuesday with a sumptuous winner for Manchester United to take them top of the Premier League for the first time since the 2012-13 season.

It continued what appears to be a remarkable resurgence from the 27-year-old following comments from his agent Mino Raiola that his time at Old Trafford will be over at the end of the season.

Yet whether or not that assertion still stands, Pogba's main focus will now be the club's biggest game of the season so far, when they take on the team that they have just replaced at the top of the pile in arch rivals Liverpool on Sunday.

But despite his - and the club's for that matter - recent excellent displays, will Solskjaer think twice before opting to change tactics and add solidity rather than flair when facing the attacking menace of the Anfield side?

The team that the Norwegian put out in the 1-0 win at Burnley was designed for a specific purpose, to combat the physical gameplan employed by the hosts. It was a big United team. Eric Bailly was at the back, Paul Pogba and Nemanja Matic occupied the middle, and Edinson Cavani was handed a start up top.

By the same merit, the Norwegian will have to ring further changes to help United counter the pace of Mohamed Salah, Roberto Firmino and Sadio Mane and the wizardry of Thiago Alcantara in the middle.

But the best manner in which to do that is not so immediately forthcoming.

Scott McTominay - full of confidence after captaining and netting in the FA Cup third round win against Watford - and Fred could bring more energy to the midfield, and it is likely to be in addition to, rather than instead of, Pogba.

But that would in all probability lead Solskjaer back to the diamond formation that had mixed success throughout 2020, particularly when the pressure was on the Norwegian boss.

The system worked very well against RB Leipzig in the Champions League with a 5-0 thrashing, with United showing some signs of stability at the back while looking like they could score with most attacks.

But they were insipid and uninspiring a few days later in the home defeat by Arsenal, while a 1-1 draw at Everton last season was also another frustrating display which saw the faithful raise concerns about the diamond formation.

Against the German side, Matic occupied the base of the midfield well, something Fred was unable to do to the same effect against the Gunners having started on the right of the diamond against Julian Nagelsmann's men.

Pogba himself was positioned on the left-hand side of the diamond and Bruno Fernandes, as he did against the Gunners, will start as the most advanced midfielder at Anfield after becoming the linchpin in United's turnaround with 15 goals and nine assists already this season.

If Solskjaer reverts to the diamond, Pogba and Fernandes' roles are less likely to alter but it is who accompanies them to the side and behind them which will be of greatest concern given performances using the system in the last calendar year.

McTominay started on the right-hand side of the diamond in both of the Premier League matches but was counterproductive by stifling Aaron Wan-Bissaka's attacking threat which is particularly critical given the lack of a wide right forward in the formation.

Fred has looked slightly more comfortable in that role with Matic at the base, but the Brazilian was perhaps even more convincing as one of two midfielders with the Serbian at Anfield last year.

Solskjaer described Fred's performance as 'top' in the 2-0 defeat in January last year after being deployed centrally in a 3-4-1-2 formation.

Moreover, whether the former United striker would really be able to churn the best out of Pogba in a diamond is also questionable and could well halt the momentum he has built up in recent weeks.

He recorded an assist playing on the left of a diamond against Leipzig but was the player to foul Hector Bellerin for Pierre-Emerick Aubameyang's penalty in a more abject display.

There are however signs that Premier League audiences could well see the best version of Pogba for around 18 months in the coming months, having figured more recently with two other midfielders, particularly since Raiola's bombshell comments on December 8 last year.

A consistence period of fitness has helped his cause and has seen him complete 90 minutes on five occasions since the comments, and domineering performances like the ones United fans had come to expect following his £89million move from Juventus in 2016 were plain to see against Aston Villa and Burnley.

Such dominance from the World Cup winner could see Solskjaer favour attacking flair rather than defensive solidity if he believes the ruthlessness of Pogba and Fernandes will be too much for the Liverpool to handle, particularly if Fabinho is forced to drop back into defence once more.

United have failed to win any of their matches against the so-called top six this season, and excusing the exceptional circumstances of Anthony Martial's red card against Tottenham, they have lacked drive and energy against the others and failed to score against Chelsea, Arsenal and Manchester City.

With arguably the toughest side they will face this season up on Sunday, Solskjaer's options ultimately boil down to whether reverting to the diamond formation will cause significantly more harm to their chances of winning than the 4-3-3 formation that has worked wonders in recent weeks.

The safer option to counter Liverpool in the best possible manner would be to position Matic at the base of the diamond, with Fred and Pogba on the left and right and Fernandes operating as the attacking midfielder.

That temptation may be hard to resist given it is United who now the advantage of the top of the table, and a draw would preserve that three-point lead and make a slight dent in Liverpool's aspirations of retaining their crown.

Yet if United's stars are to replicate their ancestors' achievements of famously fulfilling Sir Alex Ferguson's promise of knock Liverpool off their perch this time around, the usual three-midfield option could inflict a defeat that will raise the belief of the United fanbase of a first title since 2013 and a first trophy for four years.