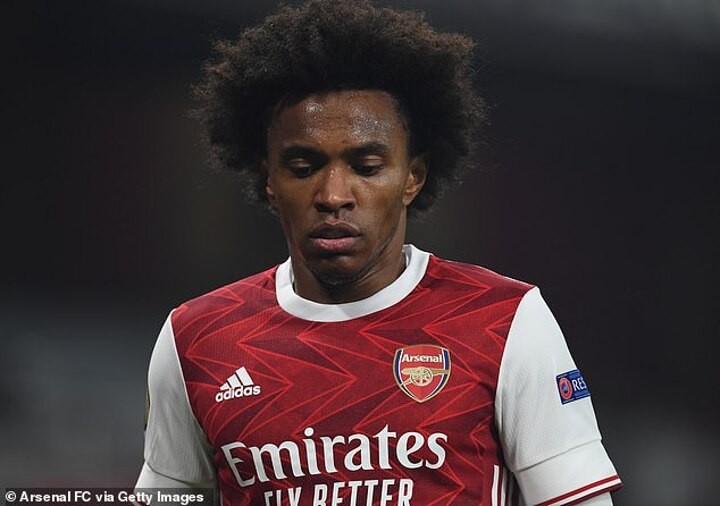 Willian has revealed he has endured one of his 'most difficult' seasons as a professional footballer with Arsenal this term, but dismissed rumours he had not wanted to play for the club.

The Brazilian joined the Gunners on a free transfer after leaving Chelsea in August last year, and will have completed a season of his three-year deal in June.

But the 32-year-old has yet to score for the Gunners in 31 appearances across all competitions and has completed just one Premier League game since the turn of the year.

But speaking to BT Sport before Arsenal's 1-1 draw with Slavia Prague in their Europa League quarter-final first leg, Willian insisted Mikel Arteta's philosophy has meant he has needed time to adapt.

'Yes, it's been very difficult for me this season, one of the most difficult of my career,' he said. 'I always want to do something special for the team but this is life.

'The new philosophy of work, I think it's taken time to adapt. It wasn't because I don't want to play or be good for Arsenal.

'Some people were saying I don't want to play, no no no I always want to play well but sometimes you have difficult moments.

'When you play well people are going to say, you are amazing, you are the best in the world.

'When you don't play good they say you're the worst player in the world. Of course I want to be successful here.'

His comments come just a day after he demanded authorities do more to tackle online abuse and racism directed at footballers.

'If they want to criticise me, it's no problem,' he added. 'But when they attack your family with words that I cannot say here, that hurts. It's a big problem. These people, they have to pay for that.

'I've seen some people deleting their social media because of racism and the abuse. Straight away, I want to do that. But then when you think, take a few minutes and relax a little bit more (it changes).'

Asked if he was afraid to look at his phone after matches, Willian admitted: 'Yes, sometimes. We are human. We are professional. We do our best to help the team, we want to win, we never want to lose.

'But sometimes you have a bad day and they come and say words that hurt you. That's why we want to stop it. Enough is enough. To change it, we need the authorities to act. That's it. I will never stop my fight against racism.

'We have to find a way to change social media. People want to have Instagram, Twitter, Facebook — they need to put their ID, passport or whatever. Then when these things happen, we can catch them, the authorities can catch them. They (the Premier League, UEFA and FIFA) have to support us.'