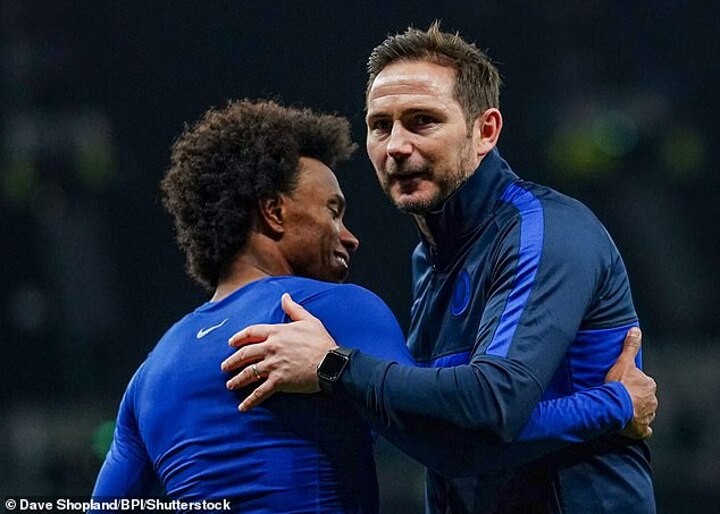 'We want him to stay at the club,' insisted Frank Lampard last July when asked if an out-of-contract Willian had a future at Chelsea.

In the end the Blues hierarchy felt differently to their young boss and the Brazilian's demands for a three-year contract were never met. Determined to stay in London, he headed north to join Arsenal.

Lampard was said to have been 'desperate' to keep Willian in his ranks given his experience in a Chelsea dressing room that has continued to get younger and younger in recent years.

Like others, such as Real Madrid, shorter contract offers are typical of Chelsea's transfer strategy once players go beyond the age of 30 and months of discussions saw the club stand firm on their final offer of a two-year proposal.

It wasn't enough and Willian chose Arsenal as his next landing spot, talking up an opportunity at the Emirates Stadium that he hoped would bring him Champions League glory - the one trophy that eluded him in seven years at Stamford Bridge.

Now he returns to Stamford Bridge to face a side that is preparing for the showpiece finale against Manchester City later this month - that has to sting.

There's no Lampard anymore and the remnants of the squad he knew continue to fritter away as Chelsea stand vindicated on their decision to move on from their relationship with the Brazilian.

Willian started his career back in Brazil with Corinthians before making the move to Europe with Ukrainian side Shakhtar Donetsk in 2007.

Following more than 100 appearances for Shakhtar, he elected to join Russian side Anzhi Makhachkala in January 2013. Within six months he was unveiled by Chelsea in a £30million deal.

Jose Mourinho was delighted to have stolen him from Tottenham, who themselves had agreed a £30m deal to acquire him.

Willian quickly became a hit and a firm favourite of Mourinho - so much so that the Portuguese was reported to have tracked him while in charge at Manchester United and Tottenham.

His goal returns were largely similar since that 2015-16 season where he finished with 11. He matched that total in last year's Covid-19-disrupted campaign but it wasn't enough to convince the board to break their rule for over-30s.

'I haven't given up hope on it,' Lampard said back in July following the restart.

'The club are still in discussions with him. We want him to stay at the club, but I also appreciate this contract for him is a big deal because of his age and where he's at.'

Hakim Ziyech (28) was arriving from Ajax and Christian Pulisic (22) was going to be competing for places. There was also Callum Hudson-Odoi (20) to consider. All younger models with greater upside in terms of future sales.

It was a big call and one that hurt Lampard in losing valuable Premier League experience. It is too simplistic to say a sliding doors moment on Willian contributed to Lampard's demise.

Chelsea, on the pitch, have not missed the Brazilian and his struggles at Arsenal will see the board vindicated in moving on at the right time.

But Lampard's public plea to keep hold of him will not have gone unnoticed and it came as a disappointment - even if supporters did not hold the same frustration.

What has followed at Arsenal has been nothing short of disastrous for Willian.

His goal against West Brom at the weekend was his first since he joined from Chelsea last summer. It took him 37 appearances to find the net.

Willian turned up at Arsenal with big objectives, his deal important to him so he 'didn't feel like a player just passing through' for a couple of seasons.

The plan was a Champions League medal. Instead Arsenal are ninth and preparing for no European football next season for the first time in 25 years.

'I was at Chelsea for seven years and won everything except the Champions League,' he said following his move.

'Hopefully this move will give me the trophy I haven't got as well as another Premier League title.'

It is a comment that has brought smiles to Chelsea fans who took issue with him joining a London rival.

Arsenal arrive at Stamford Bridge as underdogs in every respect. Since Thomas Tuchel took charge of Chelsea in place of Lampard, they have been sublime, reaching the Champions League final as well as the FA Cup final.

But Willian cannot concern himself with what might have been. It's been a year to forget with Arsenal and he is the first to hold his hands up.

'When I don't play well, I am the first to criticise,' he said after the West Brom win.

'Me and my family know how difficult it was for me this season.

'But I never doubt what I can bring to this team — my quality, what I can do — and I finally scored this beautiful goal. Let's keep going!'

Now Willian and Chelsea come face to face again and both are channeling in two very different directions.