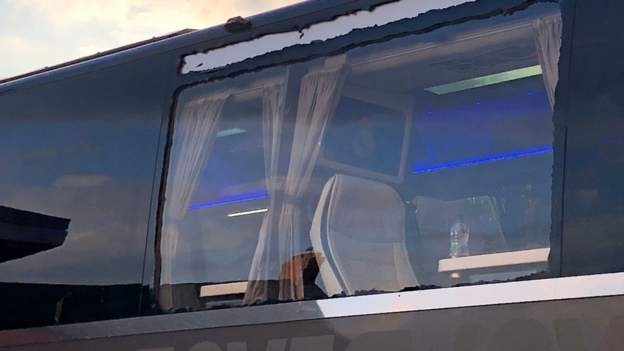 One pane of a double-glazed window was smashed

Liverpool have condemned the "unacceptable and shameful behaviour" of "a few individuals" after Real Madrid's team bus had a window smashed as it arrived at Anfield on Wednesday.

Hundreds of Reds fans packed on to Anfield Road before the Champions League quarter-final second leg.

The Real bus was booed as it passed, with several objects thrown.

One pane of a double-glazed window was smashed, with Liverpool staff seen cleaning up broken glass on the ground.

A Liverpool spokesperson said: "We condemn unequivocally the actions that led to Real Madrid's team bus being damaged during its arrival to Anfield this evening.

"It is totally unacceptable and shameful behaviour of a few individuals.

"We sincerely apologise to our visitors for any distress caused.

"We will work together with Merseyside Police to establish the facts and identify those responsible."

La Liga giants Real lead 3-1 on aggregate, with the winners of the tie to face Chelsea in the last four.

The match is being played behind closed doors because of ongoing Covid-19 restrictions.

In 2018, cans, bottles and flares were thrown at Manchester City's team bus as a crowd gathered outside Anfield before Liverpool's 3-0 Champions League quarter-final first-leg win.

At the time, Liverpool apologised and called the behaviour "completely unacceptable". No players or staff were injured but two police officers were hurt and the coach was left unsafe to be driven.