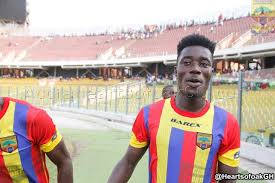 The Premier League Board (PLB) has named a three-man shortlist for the maiden NASCO best player for the month.

Cobbinah is in contention for the inaugural award alongside Daniel Lomotey of WAFA and Berekum Chelsea’s Stephen Sarfo.

But Cobbinah, who scored one goal in five games with five assists and one man-of-the-match award, says he deserves the month gong than any of the shortlisted players.

''I’ve seen all the other nominees and I can confidently say I merit this award because when you take my performance into consideration against my competitors, there is no way this award should pass me by,'' says the fleet-footed midfielder on Happy FM.

“To have scored one goal in five matches with five assists is not easy to come by. I pray I become the first winner of the accolade.''

Cobbinah has helped lift Hearts from their 9th spot to 4th after making his debut against Berekum Chelsea on match day 9.