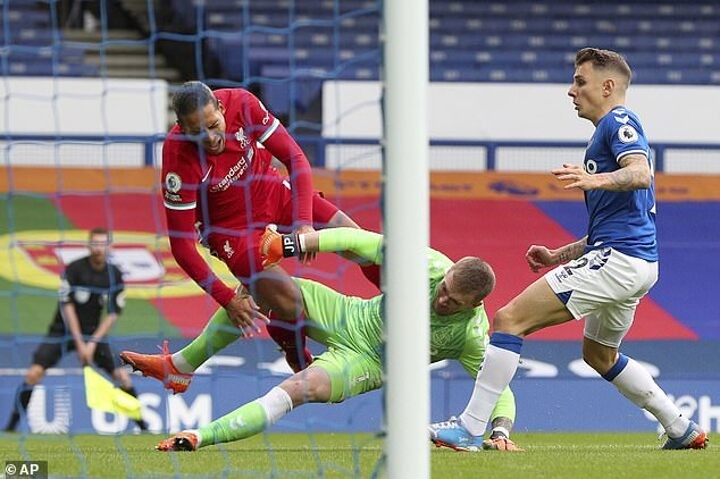 Since his arrival in January 2018 for a club-record £75m, Virgil Van Dijk has been simply unflappable in his form and fitness. Yet that could be about to change.

Following a shocking tackle from Jordan Pickford on Saturday in a controversy-ridden Merseyside Derby - which went unpunished - the Liverpool centre back suffered a potentially season-ending injury to his knee.

Liverpool were unhappy with rumours yesterday that Van Dijk may miss the rest of the season with an ACL injury but there's no doubt that the injury is serious, with the Netherlands captain set to miss at least a number of weeks.

As Jurgen Klopp emphasised afterwards: 'Virg plays with pain and he never misses a game. I do not know what it is but it does not look good.'

So, should the worst-case scenario come to fruition for the Liverpool boss, how will the champions adapt? And who can fill in alongside Joel Matip and Joe Gomez as alternatives at centre half?

After selling Dejan Lovren in the summer, and notably opting not to replace him, are Liverpool about to suffer due to their lack of cover in defence?

The defensive midfielder has become a key player since his arrival from Monaco two years ago, following a period where the Brazilian played in a variety of positions for the Ligue 1 club, including right back.

However, despite his efficiency at breaking up the play in the centre of the park. Fabinho may well be utilised as a defender in Van Dijk's absence.

The 26-year-old filled in alongside the Dutchman against Chelsea last month and was a standout performer, nullifying Timo Werner and looking more than comfortable in a deeper role.

With a cluster of midfielders available to Klopp, Fabinho is the most obvious candidate to fill in at the back should Van Dijk be out for a prolonged period.

Yes, the Reds would miss his quality in midfield. But short of cover at the back, Fabinho could play an even more crucial role in the forthcoming weeks and months.

Similarly to Fabinho, the Liverpool captain is a workhorse in midfield but could be used as cover at the back.

Though an uncommon position, Henderson did play at centre back alongside Van Dijk in the FIFA Club World Cup last December, when the Reds beat Mexican side Monterrey in the semi-finals.

On that occasion, the England international performed admirably and should Van Dijk be missing for the rest of this season, it would not be completely unfathomable that Henderson fills in at centre back.

With Thiago Alcantara, Gini Wijnaldum, Alex Oxlade-Chamberlain and Naby Keita all other options in centre midfield, Henderson's void could be filled. Whether Klopp sees his captain as a long-term viable option is another matter all-together.

Rumoured with a host of Championship clubs right up until the domestic transfer deadline on Friday, Nat Phillips stayed put - and that in itself could be vital for Liverpool's ambitions.

The 23-year-old, who made his first-team debut in the FA Cup third round victory against Everton last season, is a natural centre half and could make the step up to the starting XI, particularly with the Reds playing two matches a week over the next month.

He spent half of last season on loan at VFB Stuttgart so has experience abroad at the top level, and is naturally domineering in the air.

A fringe first-team player, Phillips may well be called upon in the coming weeks.

The 18-year-old joined Liverpool last summer for £1.3million from the academy at Ajax and is highly-rated amongst the coaching staff at the Reds.

He made his first start against Arsenal in the Carabao Cup last season, in a penalty shoot-out victory following a 5-5 draw, and has been amongst the first-team group since his arrival on Merseyside.

Though a sudden step up to the starting XI may be drastic, unlike midfielder Harvey Elliott who moved on loan to Blackburn on Friday, the teenager is still present at Melwood and could be utilised by Klopp.

The 17-year-old was the most impressive performer amongst the academy group during the Reds' brief pre-season in August.

The Frenchman only signed his first professional contract in the same month but certainly made a notable impression on Klopp during the first-team camp in Austria.

Though he made an error in a friendly against Blackpool at Anfield, Klopp reassured the youngster afterwards, saying: 'Billy played super balls, super passes... 17 years old, wow, the whole life in front of him which is really nice. Big talent

Previously on the books of Lyon, could Koumetio be used as something of a last resort in Van Dijk's absence?

For all the young imports from abroad, English centre back Rhys Williams was the player actually picked by Klopp in a game this season: against Lincoln in the Carabao Cup third round win.

Playing alongside Van Dijk, the 19-year-old looked stable and secure in what was a comfortable 7-2 victory.

Williams has been with Liverpool since the age of 10, and also started in the next round against Arsenal where he did not look out of his depth.

Despite being knocked out of the competition, could Williams play a bigger role this season should Van Dijk's injury be damaging?