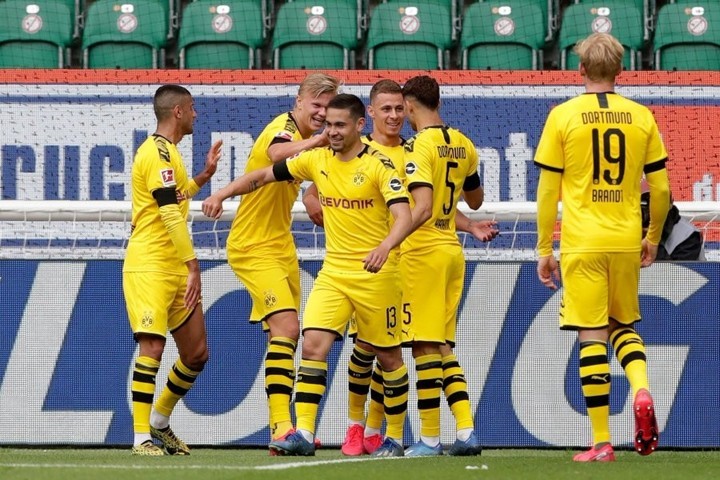 Game is over and the final score is Wolfsburg 0-2 Dortmund. Here is the match report.

A first opening for Dortmund, as Hazard crafts some space on the edge of the area and wastes no time in unleashing a curling, left-footed effort towards the top-left corner. Casteels would have been caught out, but there was too much on Hazard’s strike and it sails wide.

25' CLOSE! Weghorst's header over the bar

Mehmedi gets down the left for Wolfsburg and flicks in a cross, which Weghorst gets to. His header, however, flies over the top-right corner.

Finally, the visitors manage to get in behind Wolfsburg’s defence – Brandt releasing Hakimi, who in turn feeds Hazard. His cross is missed, rather comically, by Haaland, but Guerreiro is well placed to tuck home.

Brandt releases Hakimi with a precise throughball, and the full-back supplies a neat cross into Hazard’s path. He goes for goal, but his first-time effort flashes wide.

45' Substitution at half time! Can replaces Hummels

There has been one change at half-time. Hummels has gone off for Dortmund, with Can coming on to replace him.

The ball falls kindly to Steffen, who races through one-on-one with Burki. The Dortmund goalkeeper manages to close the angle and force Steffen into a strike, and the Wolfsburg attacker fails to keep his cool, with his effort rattling away off the woodwork.

Medmedi does well to twist and turn his way clear of several defenders before prodding in a cross which evades everyone, only to then find Arnold at the back post. He can’t adjust his feet quickly enough, though, and Dortmund are able top clear their lines.

Another change for Dortmund. Brandt’s race is run, with Sancho now coming on to offer some real pace to the visitors’ attack.

Dortmund get clear on the counter-attack, with Haaland working brilliantly to shrug off a few defenders and lay it off to Sancho. He hesitates before slipping it into the path of Guerreiro, whose first-time strike takes a deflection and flashes wide.

Sancho drives forward from deep and, unchallenged, lays it off to Hakimi, who keeps his cool to slot home into the bottom-left corner.