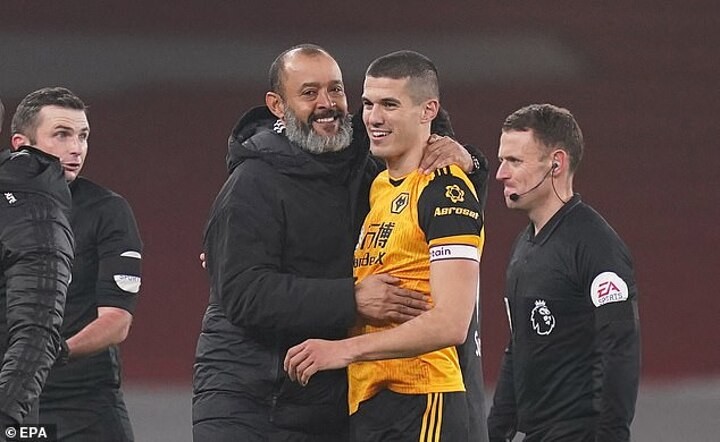 Nuno Espirito Santo believes Wolves will relish playing in front of a crowd for the first time since March.

Wanderers go to Liverpool on Sunday with the champions poised to welcome back 2,000 supporters.

Anfield will host fans for the first time since their Champions League quarter-final defeat to Atletico Madrid in March, just before sport was halted amid the coronavirus crisis.

Liverpool is in the Government decreed tier two - allowing them to host fans - while Wolverhampton remains in tier three, denying Wolves the chance to have supporters at Molineux, but Nuno expects his players to feed off the home crowd.

He said: 'I am happy, really happy. We want fans back and on Sunday there will be 2,000 of them, even though they are not Wolves fans, they are football fans and this is what the game needs. It needs the fans back in the stadium.

'What players enjoy is to play in front of fans. This is why they work and how they enjoy. Having no fans doesn't make sense. I am so happy they are returning step by step.

'Hopefully when it is reviewed on the 16th, then we can go to Molineux in front of our own fans.'

Wolves are without Raul Jimenez as the striker begins his recovery from an operation on his fractured skull following a clash of heads with David Luiz in last Sunday's 2-1 win at Arsenal.

Record £35million recruit Fabio Silva could replace him for his first Premier League start since joining from Porto in the summer.

He has only had 115 minutes of top-flight action so far as the club ease the 18-year-old in.

Nuno said: 'It's a chance for all the squad, knowing we don't have someone who is really important for us. I don't recall a game when Raul was not in the team.

'It's a chance for us all to raise our standards and create solutions for the team.'