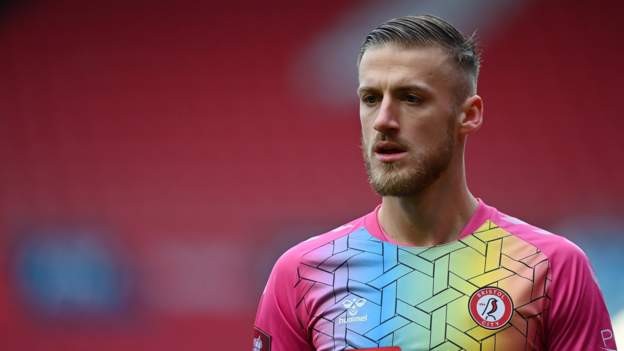 Dan Bentley has also played for Southend, where he made 141 appearances

Wolves have signed Bristol City goalkeeper Dan Bentley for an undisclosed fee on a two-and-a-half-year deal.

The 29-year-old, who has never played in the top flight, made 124 appearances for the Robins after joining from Brentford in 2019.

Bentley made 123 appearances for the Bees, keeping 28 clean sheets in his first two seasons at the club.

His deal also has the option to extend for a further two years.

Bentley is Wolves' fourth signing of the January window after the arrivals of midfielder Mario Lemina, defender Craig Dawson and winger Pablo Sarabia.

The shot-stopper, who captained Bristol City to 17th place in the Championship last season, joins first-choice keeper Jose Sa along with Matija Sarkic and Jackson Smith.

Wolves are 17th in the Premier League, level on points with fourth-bottom Bournemouth, but outside the relegation zone on goal difference.

Visit our Wolverhampton Wanderers page for all the latest Wolves news, analysis and fan viewsYou can now get Wolves news notifications in the BBC Sport app - find out more