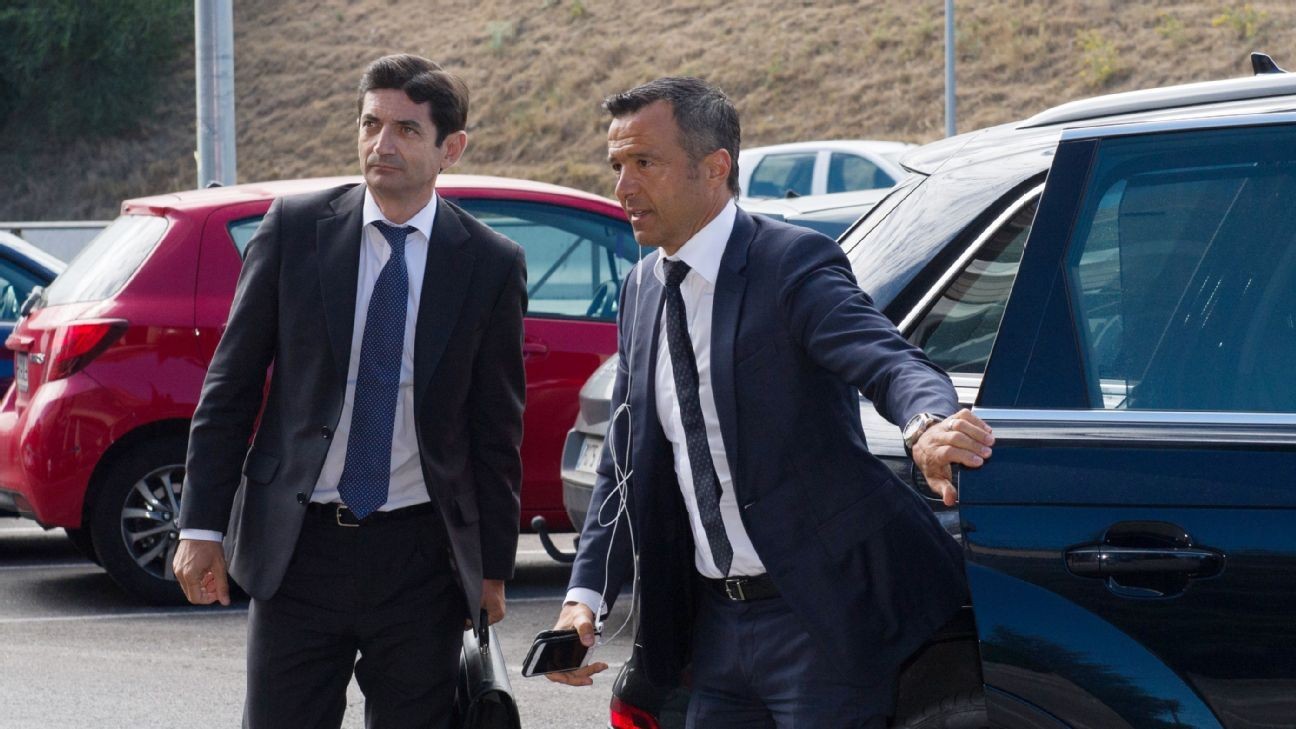 Arsenal privately bristled at the suggestion that one agent was exerting significant influence over their transfer policy, but on Saturday evening they face a team who are proving it might not actually be a bad thing.

Wolves stand within striking distance of Champions League qualification after four years working with super-agent Jorge Mendes. The Gunners are not cohorts with Kia Joorabchian to anything like the same level, but if a similar relationship is being explored, their opponents this weekend offer a clear indication it can be mutually beneficial.

There is comparable consternation at Wolves whenever it's suggested that super-agent Jorge Mendes -- who counts Cristiano Ronaldo among his star-studded clients -- is unduly prominent in the club's strategising, but their inexorable rise since he became involved is undeniable. They start this weekend's clash at Molineux tied for fifth place, six points above Arsenal in the Premier League table and strongly placed to continue their dramatic upward curve since the Mendes-advised £45 million takeover by Chinese conglomerate Fosun International Limited in 2016.

As one of the world's most renowned agents, Mendes has helped Wolves operate in the marketplace with a savvy that Arsenal have lacked in recent years.

- What did you miss? The latest from Europe's top leagues
- Soccer is back! Stream ESPN FC Daily on ESPN+ (U.S. only)t

Cosying up to agents was something former Arsenal manager Arsene Wenger objected to from a moral standpoint, and sources have told ESPN that former Gunners chief executive Ivan Gazidis found the clandestine, often grubby aspects to some transfer negotiations particularly unsavoury. In contrast, the new regime at Arsenal -- particularly head of football Raul Sanllehi and technical director Edu -- were brought in to add fresh football expertise and make the club more streetwise in talent identification and transfer execution. That led to the formation of a close alliance between Arsenal and Kia Joorabchian, one of a handful of representatives (alongside Mendes) worthy of the "super-agent" moniker. So far, though, all the Gunners have to show for that partnership is an unpopular contract extension for David Luiz and a four-year deal for Cedric Soares, who was out of contract this summer and has played only 13 minutes for the club since arriving in January from Southampton.

There's nothing inherently wrong with a club having a preferred agent with whom to do business. Many such relationships are based on genuine friendships or a firm professional understanding. (Joorabchian is, at heart, an Arsenal fan.) But if Arsenal are giving up some moral currency in aligning themselves with one particular agent above any other, shouldn't they be getting more in return as Wolves have done?

The Gunners moved swiftly last week to reject any claim that Joorabchian had ever represented Edu. Head coach Mikel Arteta was also on record publicly declaring his desire to retain both Luiz and Cedric prior to the pair extending their stays in North London, and the experience that pair brings will be a useful asset as the Spaniard attempts to inject a fresh work ethic at the club. Similarly, Bukayo Saka's contract was extended without Joorabchian's involvement, and Sanllehi in particular would be insulted by the insinuation his contacts book extends only to Joorabchian's number and his old office in Barcelona.

Arsenal's summer budget is not yet fully determined, but there is already an acceptance that they will have to extract maximum value in the marketplace, unearth a few inexpensive gems and ship out those who are surplus to requirements for as much as possible. The comparison is not precise, but if Arsenal truly have aspirations of returning to the summit of English football, they will have to overcome preconceptions about the club's overall standing, which Wolves faced when Fosun took over in 2016.

Fosun followed the advice of China's President Xi Jinping to invest in European football, with Jeff Shi becoming Wolves chairman and deciding to lean on the expertise of his friend Mendes. For the record, the deal came seven months after a subsidiary of Fosun acquired a 20% stake in Mendes' Gestifute agency. After sacking managers Kenny Jackett, Walter Zenga and Paul Lambert, Wolves appointed Nuno Espirito Santo -- Mendes' first client when the former was a 22-year-old goalkeeper -- and repeatedly raided the Portuguese market, albeit signing several players who were not represented by Mendes.

According to numerous sources, he has "opened doors" for Wolves, undeniably a tough sell at the start of his involvement, and a glance at the list of intermediaries used in Wolves' re-registrations or transactions for the current season highlights Mendes' ongoing role. The FA document names Gestifute or Talents Throne, the agency owned and operated by Mendes' close associate, Valdir Cardoso, on 14 occasions. Leeds chairman Andrea Radrizzani previously claimed the Mendes link was "illegal and unfair," but no impropriety has ever been found and Wolves simply brought in high-class players to accelerate their promotion from the Championship, which they did in 2017-18.

Jorge Mendes' involvement with Wolves has coincided with the club's rise from the Championship to a real Champions League contender. Photo credit should read CURTO DE LA TORRE/AFP via Getty Images

Ruben Neves won EFL Player of the Year in 2017-18, having cost a club-record (but not eye-watering at the highest level) £15.8m from Porto. Gestifute clients Diogo Jota, Joao Moutinho, Rui Patricio, Pedro Neto and January signing Daniel Podence have also landed at the Molineux, with an assist from Mendes. But those with an intrinsic knowledge of the work that goes on behind the scenes at Wolves cite clarity of thought and unity of purpose as equal, if not bigger, factors than Mendes' influence. He is not a strong physical presence around the club, with sources claiming Mendes has attended only half a dozen games over the past couple of years. Meanwhile, sources tell ESPN that Cardoso has been at over half of Wolves' matches and is often seen at the club's Sir Jack Hayward training ground. He's also been known to occasionally stay at the houses of players he represents.

Yet an agent can't make a club win. Money has to be spent wisely and a team has to be built. Wolves' present buoyancy owes plenty to the shared vision of chairman Jeff Shi, head coach Nuno Espirito Santo and head of recruitment John Marshall. Former sporting director Kevin Thelwell was also highly regarded prior to his departure to New York Red Bulls earlier this year, helping to spot several successful signings including Leander Dendoncker without Mendes' involvement.

Targets are also easier to identify when a team's identity is so clear, and Santo's influence has grown exponentially during his three years in charge. In that time frame he has led Wolves to a Championship title, a seventh-place Premier League finish and a berth in the last 16 of the Europa League. It was partly in admiration for the 46-year-old's progressive, innovative playing style that Arsenal put him on their long list to replace Unai Emery after the Spaniard was sacked last November.

The fear among some Arsenal supporters is that the club is still in the midst of an identity crisis, which began in the final years of Arsene Wenger's reign. Coupled with a lack of direction from the Kroenke family and competing visions in the boardroom, a close alignment with one agent might only further a scattergun recruitment plan if it services the interests of one person rather than those of the club as a whole. Arsenal can ill afford such mistakes, especially given bleak financial projections.

Edu and Joorabchian worked together on several deals during the former's time at Corinthians. Joorabchian's Sports Invest UK agency also represented Arsenal in Alex Iwobi's £35m move to Everton. Neither is out of the ordinary, but during negotiations to extend David Luiz's contract last month, Joorabchian went on a British radio station last month to declare "there are several issues within the whole structure that will be resolved." That statement raised eyebrows among rival agents with long-standing connections to Arsenal, as some privately expressed concerns about how transfer policy was being directed.

Again, there is nothing inherently wrong with listening to the highly experienced and well-connected Joorabchian, who also counts Willian and Philippe Coutinho among his impressive array of clients. But Wolves are showing one of the best arrangements comes when an influential agent feeds into a wider, stable structure delivering on a clear strategy for squad development. Arsenal have the agent part sorted. Now for the rest ...