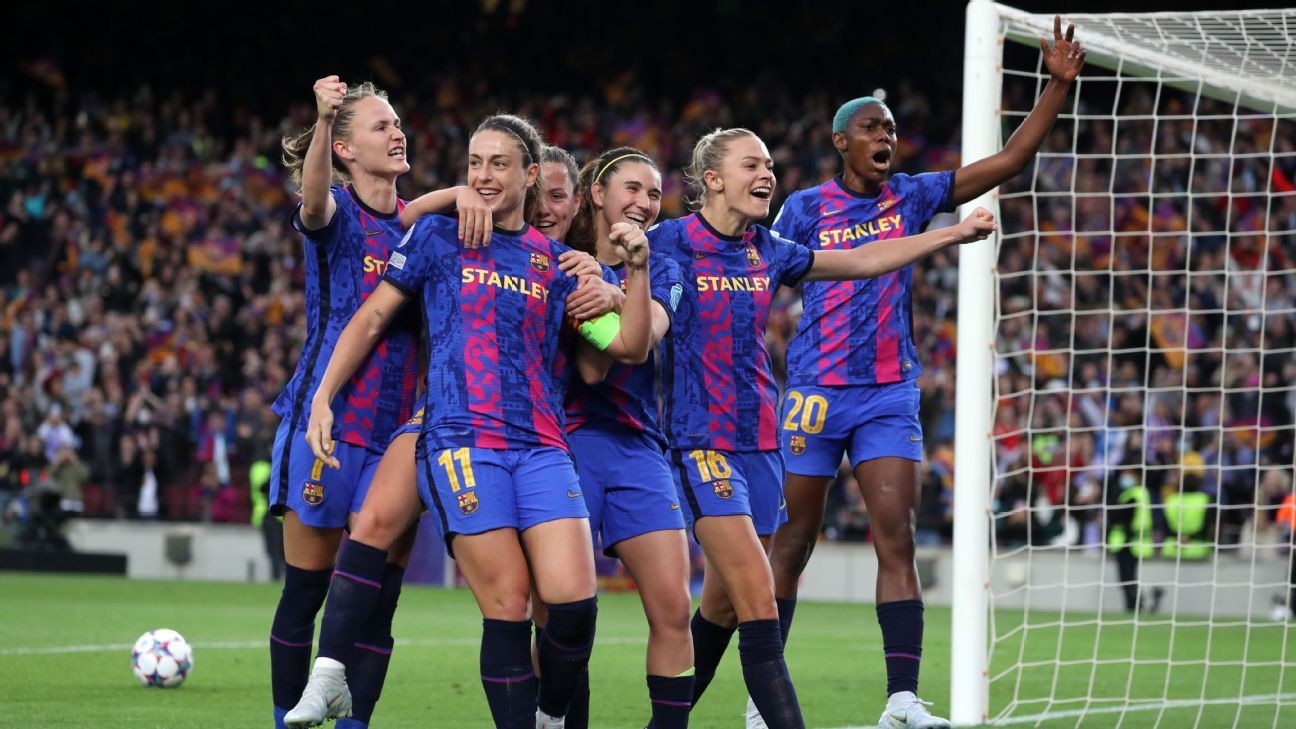 When Barcelona stepped out onto the pitch at the Groupama Arena three years ago in Budapest for their first UEFA Women's Champions League final, they were the unfavoured team, expected to be no match for Olympique Lyonnais. The narrative was set: the European juggernaut (Lyon) was clashing with the new kid on the block (Barcelona) who had to learn from their mistakes. The match played out as if it were following the same script.

Star Lyon midfielder Dzsenifer Marozsán opened the score just five minutes in, delighting the crowd in the city of her birth, and from there Barcelona began to fold into themselves with each subsequent goal. The Catalans were no slouches, but Lyon's precision play made them look like amateurs as, time and time again that evening, the Barcelona defence was ripped wide open.

Then-manager Lluís Cortés later suggested that simply reaching the final was Barcelona's reward at the end of the Champions League gauntlet, a comment that seems to help explain Barcelona's poor performance, a 4-1 loss to Lyon that never really felt in doubt.

That was then. The feeling around Barcelona now could not be more different as they embark on Saturday's Champions League final in a very different place. Seven-time champions Lyon remain a powerhouse and not a side to discount, but since Barcelona's loss in 2019, the Catalan side has forged its way and upset the power balance in Europe. The path for each side to Turin's final this weekend was markedly different, but both will feel they have something to prove in securing the European title.

The two years following Barcelona's 2019 humiliation were perhaps the most important yet for the Blaugranes. Propelled by the disappointment of that loss to Lyon, they strengthened both on and off the pitch to finally regain the Spanish title in the truncated 2019-20 season after five years without the trophy. A successive title followed as Barcelona really began to flex their muscles, and their rise to the top of the European elite confirmed with their maiden Champions League title last season.

Meanwhile, the past two years for Lyon, who had been so imperious in Hungary, were punctuated by uncharacteristic wobbles. Manager Reynald Pedros departed following the conclusion of the 2018-19 season, his replacement Jean-Luc Vasseur lasting less than two seasons despite winning the domestic treble and yet another Champions League title in his only full campaign with the club. Yet there was something missing. The league title was awarded after the season was wrapped up early due to the pandemic, but the race felt far from over when the Fédération Française de Football declared Les Fenottes champions.

While Lyon had showed their overwhelming dominance as a team in Budapest, Ada Hegerberg had shone that bit brighter than her teammates -- the jewel in the Lyon crown, her performance a display of an attacker at the very top of her game. The match was decided by her goals, but even beyond that, the Norwegian put on a clinic for 90 minutes and reminded everyone that she was still one of the best in the world. When Lyon lost Hegerberg to an ACL injury at the start of 2020, no one could have foreseen that she'd be out of the game for 20 months, but her absence was only part of OL's wobbles.

The team still found ways to win, but frequently looked disjointed under Vasseur, and even when he was replaced by Sonia Bompastor, it would take time before the darlings of European football began to look like their old selves again more recently.

Barcelona, on a mission ever since their 2019 Champions League final loss, have been out to prove there is a new giant in European women's football. The team is seen here celebrating an Alexia Putellas goal in the first leg of the semifinals of the Champions League on April 22. Joan Valls/Getty Images

Barcelona's convincing 4-0 win over Chelsea in the Champions League final last year cemented them as the new queens of Europe in the minds of those around the sport, but the path to this season's final was less resounding and has required some careful navigation. Often this Champions League season, Barcelona have been forced to rely on moments of individual brilliance to help them through tricky games, most notably when they came from behind to win their quarterfinal first leg against Real Madrid.

Last time out in the competition, away to Wolfsburg, Barcelona put in their worst performance since the final in 2019. The team was unable to deal with the She Wolves' press, and a tie that should never have been in question began to get a little uncomfortable at the Volkswagen Arena. Alas, Wolfsburg's own poor finishing denied the fans a grandstand finish.

The defensive errors haven't just been limited to one side of the draw, with Lyon still figuring themselves out under Bompastor at the start of the season. The saving grace has been the return of Hegerberg as well as the emphatic performances of rising American star Catarina Macario. Having already suffered a group stage loss to Bayern Munich, Lyon were handed their second defeat of the season by Juventus in the quarterfinals and needed to turn the tie at home the following week. Against PSG in the semifinals, the bitter rivals battled away against each other, the two 90-minute matches littered with unforced errors and uncharacteristic mistakes.

Lyon have been buoyed by the return of Ada Hegerberg, right, and the performances of rising USWNT star Catarina Macario, left. They are seen here celebrating Macario's goal in the first leg of the Champions League semifinal against Paris Saint-Germain on April 24. Catherine Steenkeste/Getty Images

If the Champions League final three years ago was about Lyon's brilliance versus Barcelona's naivety, the errors both have made in European competition this season go someway to evening the playing field. Despite their highly favourable history in the Champions League, for the first time in a very long time, Lyon aren't heading into a final as the outright favourites. Likewise, Barcelona's weak history against Lyon stop them from claiming the favourites tag.

Saturday's final is likely to be won by the team that can possess the ball better, and inflict the most damage when the chances are presented to them. Allowed to run riot in Budapest with no marker able to get close to her, Hegerberg will be looking for another five-star performance to cement her return to her pre-injury best, just as Barcelona's star, Alexia Putellas, will be looking to run the show for her side. To that end, the ability of the Catalan midfield -- Putellas, along with Aitana Bonmatí and Patri Guijarro -- to keep the ball from Lyon will be key if they are to finally get the better of the French giants.

Even with two different managers in the dugouts on Saturday, along with a handful of different faces across both squads, Barcelona's experience since the 2019 final stands out as the biggest difference coming into the clash, and it's unlikely to be decided by halftime as that one was. Both Barcelona and Lyon enter this clash as legitimate contenders, despite each weathering their own struggles along the way.

It wouldn't be the first Champions League trophy for either side -- Barcelona has one to Lyon's seven -- but for Lyon, it would prove they remain the powerhouse they have always been, while for Barcelona it would further prove their rise to the top since disappointment three years ago is for the long haul.