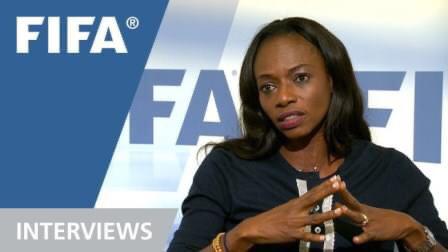 The Executive Committee of CAF canceled the senior national women’s football competition of the continent after its virtual meeting on June 30.

This is the first time the biennial competition will it not be taking place since 1998. Some female players such as 2017 Aiteo CAF Best Player, Asisat Oshoala took to her twitter handle to express her displeasure.

The 2020 AWCON qualifiers was scheduled to take place in April 2020 but was disrupted due the outbreak of the global pandemic.

Women’s football has a special place in CAF’s plans with its calendar but was unfortunate for CAF to decide on the immediacy to cancel it for three main reasons.

Explaining the three main reasons behind the cancellation,madam Isha stated that Women’s football has a special place in CAF’s plans but the circumstances were beyond CAF's control hence the decision to cancel after all options were explored.

"We are making great strives to change these narratives. For the 2020 Africa Women's Cup of Nations, there were circumstances beyond our control which made it difficult for Caf to organize it and all options were explored but to no avail."- she stated in an interview with CAF media.

DR Congo was supposed to host to tournament but they withdraw in July 2019 putting CAF in a tight position to reopen for countries to apply for the hosting rights. Equatorial Guinea and Nigeria expressed interest in hosting the elite tournament but they were not given the nod because they did not have a letter of support from their governments which is part of the requirements.

“Firstly, the withdrawal of Congo meant that we look for a new host.The bid was reopened and we received bids from Nigeria and Equatorial Guinea. However, both bids lacked the most important support documents which were the letter of support from their respective governments.”

"If you cannot get a letter of support from your government to host countries, it becomes quite complex and problematic in the long run because we cannot organise the competition without the support or guarantee from the host country coming from the government," she added.

She continued that, with countries closing their boarders due the outbreak of the coronavirus pandemic, it is impossible for the qualifiers to come on as planned.

“The outbreak of Covid-19 which we all know led to the suspension of all football activities around the continent and indeed the rest of the world. Due to that fact, the qualifiers initially scheduled for April 2020 had to be postponed indefinitely.”

"With the women's Afcon being a senior women's national team competition, we could only schedule the matches based on the Fifa calendar dates which were also affected by Covid-19. Again, due to Covid-19, the calendar was revised and left us with two window opportunities being in September and October for qualifiers.”

"We had the closure of borders across the continent and so, it was very unlikely we will be able to honour these matches within these window opportunity dates taking into consideration the travel restrictions and we also have the U17 and U20 Women's World Cup qualifiers which have to be completed this year."- she stated.

The cancellation of the 2020 AWCON came as a big blow to a lot of Women football fans on the continent after Ghana successfully hosted the previous edition in 2018. She said CAF didn’t take the easy way out of the situation by deciding to cancel it.

"As you can see, it's not the case of not being able to meet all the expectations of people or that we just decided to take an easy way out to cancel the women's Afcon 2020 just because it's women's football but because of some very obvious reasons totally beyond our control.”

"As I've listed, there were options that we went over and over again to see how best we could accommodate but we just couldn't. For the shock news to fans, I understand how disappointing this could be, again, everyone needs to understand that it is based on the current global situation.”

"It's got nothing to do with another agenda other than the fact that we simply cannot hold the competition during abnormal times that we have now. Caf, as you know and may not, has even allocated some substantial amount to support to the host country to stage the final tournament but no country is being forthcoming yet because of the Covid-19 which has disrupted every single economy in the world.”

"You cannot go and impose a competition on a country to host if they are not ready. It has to be a collective decision and it also has to be organised under conducive circumstances and no country is operating under normal circumstances. These are abnormal times.”

"When we do host these competitions, you want your current competition to outdo the last one and get one better than the other. Ghana was a hugely successful competition and, so why host something that is going to be probably limited or second-best or really not good at all only to be criticized as to why did we go ahead with knowing full well there were challenges.”

“I think that it is best that we leave it as it is. We still monitor and plan for better days ahead. We are planning and at the same time, we have been looking for the host of the 2022 Awcon which will also serve as the qualifier for the 2023 Women's World Cup. Even though the decision is not good news, of course, it gives us time to reflect and plan.” "The good news is that women's football is going to bounce back in style and get better. We've got Covid-19 but it does not mean we will become a defunct or abnormal feature if we like our sport.”

"Certain challenges in life are there to strengthen you and to make you get better, especially when you're able to rise above these situations and that's what is happening with women's football during this Covid-19."