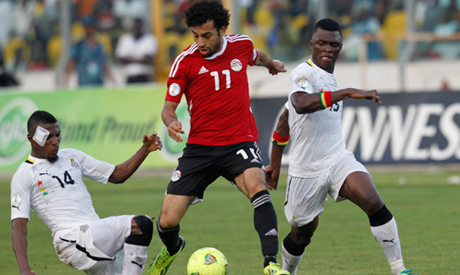 Ghana will take on Egypt in the qualifiers
Share

Ghana FA president Kwesi Nyantakyi says Egypt will be the toughest side the Black Stars will face in their qualifiers for the 2018 World Cup.

The Black Stars were on Friday drawn in Group E to face the Pharaohs, Congo and Uganda with the winner of the group clinching a place at the tournament in Russia.

Ghana brushed Egypt aside 7-3 on aggregate to qualify for the previous World Cup in Brazil which has given lots of hope to fans of the Black Stars.

Despite the Black Stars finding the Ugandans and Congo difficult in their recent matches, Nyantakyi insists Egypt will be the toughest side in the group.

“It’s a tough group for us surely. Uganda is a good team, Congo is good too, but Egypt are our toughest opponent," the Ghana FA president said after the draw held in Cairo.

“Beating them in the 2014 FIFA World Cup qualifications doesn’t give us any psychological advantage. On the contrary, it’s a disadvantage.

“They will come to payback, and we have to be aware. I watched some games for Egypt and they have a new and very good team."

Ghana will open their qualifying campaign in October when they host Uganda before travelling to Cairo the following month to take on Egypt.