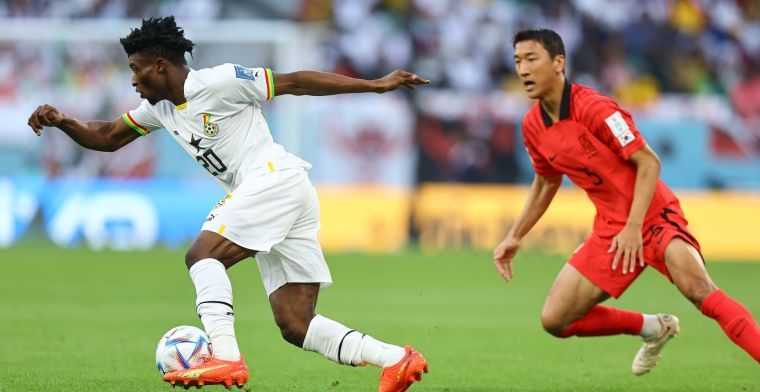 Mohammed Kudus pefers in the No. 10 role

The Sporting Director of the Spanish giants Barcelona, Jordi Cruyff, has expressed his shock over the debate of the right position of Mohammed Kudus at Ajax Amsterdam which still lingers in the Ghana team at the 2022 World Cup in Qatar.

The 22-year-old has taken the world by storm with his performances at the global tournament despite not being played at his favourite position which has been the case at his Dutch club.

Ajax coach Alfred Schreuder has deployed the talented play-maker as a striker even though Kudus operates better in another position which has generated a lot of debate in Holland.

At the Black Stars , the multifunctional Kudus plays as a hanging right winger, after he was turned into a striker at Ajax under Schreuder which has led to a lot of condemnation of the coach.

The best position for the  number ten originally is a topic of discussion in the Netherlands.

"I am surprised that his position is being discussed in the Netherlands, whether he is an attacking midfielder or a striker," the Barcelona chief Cruyff said, implying that the player must be used as his favourite position.

Barcelona have been monitoring Kudus even though they have no concrete interest in signing the Ghana's 2022 World Cup superstar yet.

Sporting director of the Spanish giants Jordi Cruyff confirms he has been following the performance of the amazing youngster on behalf of the Catalans.

With two goals and one assist at the World Cup, Kudus continues the strong line of the first months of this season at Ajax seamlessly with the Ghanaian national team.

The winger has also managed to make history with his national team, as he is the first Ghanaian player to have managed to score a double in a World Cup match.

The striker is undoubtedly one of the surprises of the tournament, and a serious candidate to be able to enter the 11 best players in the group stage.

The 22-year -old striker may be one of the cases of players who explode in a World Cup and become known internationally.

He was already being talked about before the tournament began, after the great numbers he is achieving with Ajax.

In 20 games, the Ghanaian has scored 9 goals and provided assists, so if he continues to show this level in the World Cup, he could be one of the names of the winter market.