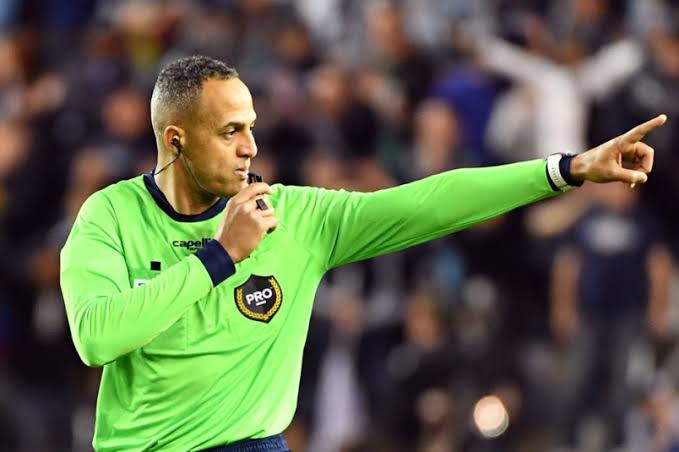 The decision of American referee Ismail Elfath to award a dubious penalty for Portugal against Ghana has sparked global outrage.

The 40-year-old is in the eye of the storm after he refused to take check with VAR for a second opinion on the controversial decision which has brought technology on its knees.

And the reactions around the world has been immense and mind blowing.

Ismail Elfath! It took an African to rob an africa team, Ghana. The enemy is always one of yours.

Referee Ismail Elfath: You were not fair to @GhanaBlackstars in this #Qatar2022 #FIFAWorldCup game against @selecaoportugal, that they lost 2-3. @Cristiano did not deserve that penalty you gave. Why did you not use #VAR? Why? At least you should have checked! 🤷🏾‍♂️😐 pic.twitter.com/NkchFj4fEL

Dear @FIFAcom, this is a public protest asking you to review and suspend this referee, Ismail Elfath. He’s an apology of a referee and shouldn’t be doing this at this level. Game changing decisions without remorse - @SaddickAdams FIFA | Robbery | Nigerians | #racism pic.twitter.com/nNCu5Ba83L

“I just wanted to be able to tell my grandkids I officiated a World Cup match that Ronaldo scored in.” -Ismail Elfath on his penalty decision pic.twitter.com/J5zkW9xkb8

This’s the most disgusting officiating I’ve ever witnessed in a long while..

Shame on you Ismail elfath, that is never a penalty and you knw it is not, shame on you @FIFAcom

That was a poor officiating from Ismail Elfath pic.twitter.com/mUrZIs9C3x

Hello @FIFAcom,can your referee review panel Ban and send home referee Ismail Elfath.Not only was he bias but shown the tendency of racism when he emphatically refuse to use an alternative decision making tool VAR.His act changed the course of the game.Bad refereeing#Qatar2022 pic.twitter.com/dVqSid3Vxl

Ismail Elfath ignored The VAR in the Ghana 🇬🇭 vrs Portugal 🇵🇹 game , my question why ? Even the Blackstars players was urging him to check it from THE VAR but still ignored them . This is pure robbery

Ismail Elfath is a racist

1.Gave out a controversial penalty 2.Didn't check 2 goals which could be flagged offside. Ismail Elfath needs to be brought to book immediately..... He is a damn #racist Was Var man of the match Abedi pele fraud. #FIFAWorldCup #Qatar2022 #GHa pic.twitter.com/AQgVWXtZ2X

Referee Ismail Elfath is very pathetic!!! Don’t know why FIFA allows such a person to handle a game at this level. Not even worthy to handle an elementary school soccer game.

Dear @FIFAcom,this is a public protest asking you to review and suspend this referee, Ismail Elfath. He’s an apology of a referee and shouldn’t be doing this at this level. Game changing decisions without remorse.FIFA | Robbery | Nigerians | #racism pic.twitter.com/IBNlYiIie7

Why didn’t they use the VAR ?

That was a poor officiating from Ismail Elfath !! pic.twitter.com/3Q58bBk40N

@FIFAcom should be able to suspend referee, Ismail Elfath for that decision to award the penalty in his favour because he's https://t.co/uG5rCNtdi7.

Dear @FIFAcom and @FIFAWorldCup you claim football unites together yet you support #racism How on earth was the a penalty "Ismail Elfath" must be called to check Let's know if there had been new amendment of the rules Always cheating Africa#racism pic.twitter.com/PlSSkr6GDN

Ismail Elfath is a referee that in @MLS will check VAR for a corner kick or foul in midfield. At the biggest stage he gave a PK to Portugal that wasn’t a penalty here or in Jupiter. The worst call of the tournament from the area MLS has never grown in… refereeing.

Even Mike Dean feels Ghana were “cheated”. Says it’s scary that the referee wasn’t asked to go take a second look at the Salisu incident on the VAR screen! It’s unfathomable. pic.twitter.com/L5IIamJwQ7