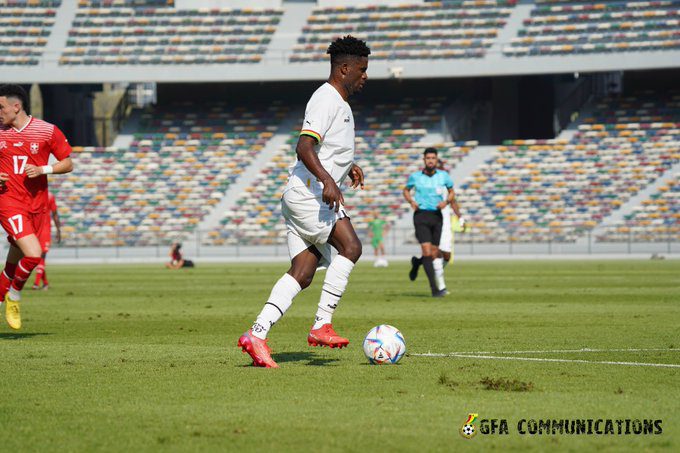 Daniel Afriyie Barnieh insists he was under no pressure after delivering a masterful performance for Ghana in their 2-0 win over Switzerland in their final pre-World Cup friendly on Tuesday.

The Hearts of Oak talisman has earned positive reviews for his impressive display against the European outfit.

The 21-year-old won the heart of many Ghanaian fans darting runs and trickery as goals from Mohammed Salisu and Antoine Semenyo catapulted the African giants to a win.

And Barnieh, who impressed on his first major start for the Black Stars, insists he has not been under the weight of expectation.

“It was a good game, there was no pressure. I stuck to what the coaches said and everything went well for me. The fans should keep on praying and supporting,” Daniel Afriyie Barnieh is quoted by Joy Sports.

The Europeans started off well with Ruben Vargas coming close in the 6th minute after meeting a cross from Breel Embolo from the right.

But the Black Stars responded moments later after Baba Rahman sent in a through ball which was fired by Daniel Afriyie Barnieh, but did not trouble Switzerland goalkeeper Yann Sommer.

Halfway through the first half Jordan Ayew also tried his luck from long range but it was calmly collected by Sommer before Mohammed Salisu had a golden opportunity to break the deadlock but his effort went wide. The Southampton defender met a cross from Jordan Ayew.

Just before half time Embolo missed the Swiss' best chance after failing to score from close range.

After the break, Inaki Williams created Ghana's first opportunity after outwitting his marker on the right before sending in a cross which was missed by Barnieh and the Ayew brothers after getting into the box late.

Moments later Ghana won a corner kick which was taken by Kyereh and after the Switzerland defenders failed to clear Salisu rose high to head home the opener.

Two minutes later Semenyo doubled the lead after an electric run on the left from Kamaldeen Sulemana saw the Stade Rennais attacker evade his markers leading to the ball falling perfectly for the Bristol City striker.

The Black Stars will open their World Cup campaign on November 24 against Portugal in Group H.