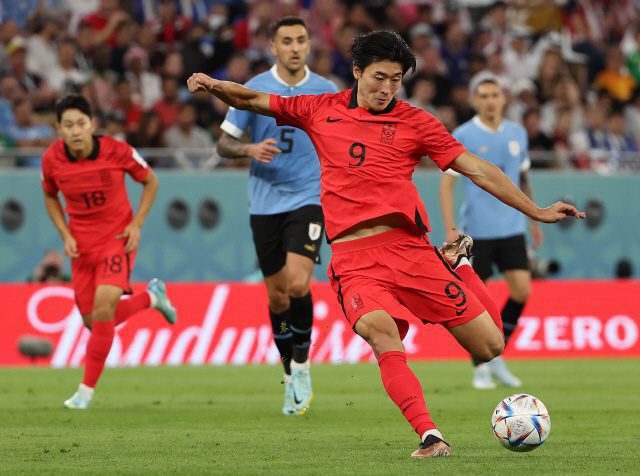 South Korea head coach Paulo Bento is set to unleash 'fans favourite' Cho Gue-Sung when they play against Ghana at the Education City Stadium in Al Rayyan by giving him more minutes on the field.

The Taeguk Warriors engage the Black Stars in the second group match of the World Cup in Qatar on Monday afternoon.

Gue-Sung was introduced in second half when Korea drew 0-0 with Uruguay in their opening game of the tournament last Thursday was immediately loved by Korean fans.

The 24-year-old forward before coming on in the 74th minute was having just 30,000 followers on Instagram but his performance against Uruguay was him reach over 300,000 followers after the game.

Gue-Sung who is currently the leading goal scorer of the Korean League is a player who is very much loved by 'true soccer fans' because his skills are outstanding beyond his looks.

Many female fans are delighted to see Gue-Sung, who has the 'beast body' with the face of a 'white student'.

Since his debut at FC Anyang in the K-League 2 (second division) in 2019, the forward's extraordinary appearance has been famous among K-League female fans.

He was called the K-League's "comic book tearing man".

Gue-Sung is expected to play much more than 20 minutes against Ghana on Monday as he looks more dangerous than first choice striker Ui-Jo Hwang.