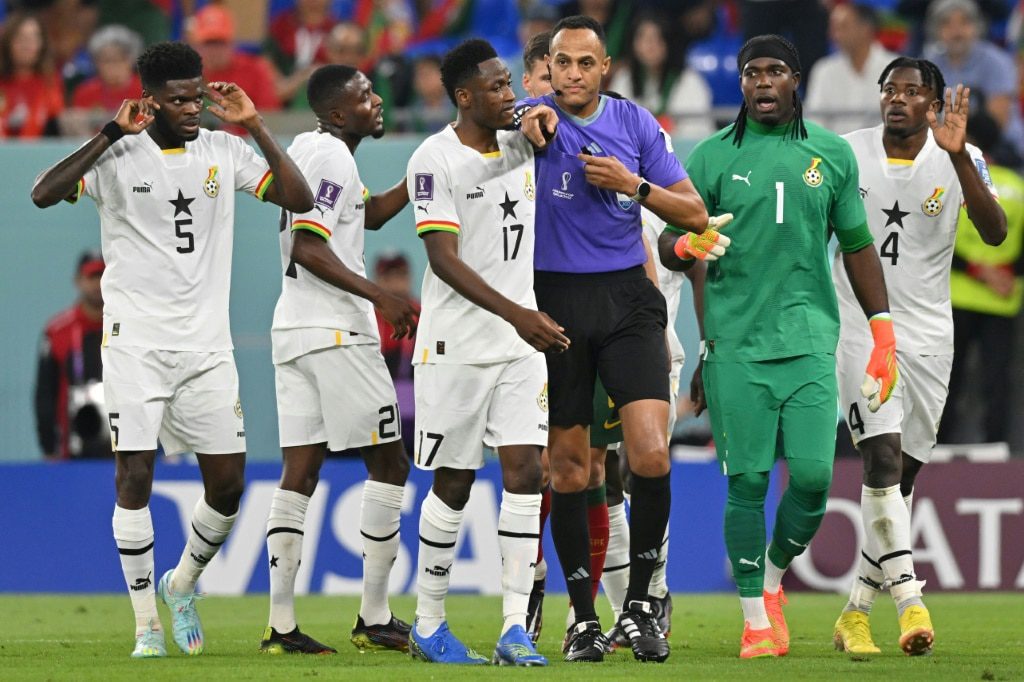 Fuming Ghanaian fans have reacted to the dubious decision of referee Ismail Elfath as the American aided Portugal to beat Ghana 3-2 in a 2022 World Cup group match in Doha on Thursday.

The 40-year-old American referee has come under sharp criticism for his sub-standard performance on the global stage.

Two crucial decisions changed the complexity of the match between the two nations with Ghana at the losing end of many dubious decisions.

The referee actually made nonsense of the VAR, that system works for some countries honestly.

Clearly Ismail Elfath got that wrong.. Not checking the VAR is pure victimisation to Ghana As a country and as a footballing nation, even when advised to take a look.. clearly outrageous, is there no VAR .. Damn wrong, he should be petitioned.. pic.twitter.com/tSBpMXh5Bm

The referee robbed Ghana 🇬🇭 in broad daylight, allowing an offside goal and awarding a penalty for no foul committed. No VAR check. Gh should petition.

It is very clear that VAR is not to be used for the African countries. It is a big shame why those refs in the VAR room never signalled the ref on the third goal. All day that was a clear offside. pic.twitter.com/gdrqE2lbK5

Clearly Ismail Elfath got that wrong.. Not checking the VAR is pure victimisation to Ghana As a country and as a footballing nation, even when advised to take a look.. clearly outrageous, is there no VAR .. Damn wrong, he should be petitioned.. pic.twitter.com/tSBpMXh5Bm

I just wish we saw the VAR lines for this. #3Sports #Qatar2022onMG pic.twitter.com/kVMfYHZTnI

Dear @FIFAcom @FIFAWorldCup could you please let this referee explain why he decided to rob Ghana Blackstars by refusing to use the VAR to decide on the penalty awarded to the Portuguese on the match between Ghana and Portugal. #QATAR2022    #RACISM #FIFATAKEACTION pic.twitter.com/SJHvKxFXfp

Not surprised an American referee didn’t go and check the VAR to confirm a penalty decision against Ghana.

I don’t know man. That unwillingness to check the VAR was very sus.

You know the referee and the Var team wasn't fair to us pic.twitter.com/ulsppznxbH

Greetings @FIFAWorldCup and @FIFAcom, please on behalf of Africa, I am seeking a meeting on #Twitter with Ismail Elfath and the referees in the VAR room during the Ghana vrs Portugal game.

As you can see, I am also called Ismail. We can trash this out like a family.

Even Mike Dean feels Ghana were “cheated”. Says it’s scary that the referee wasn’t asked to go take a second look at the Salisu incident on the VAR screen! It’s unfathomable. pic.twitter.com/4reD2J8ghG

The Referee who officiated the match between Ghana vs Portugal should be sanctioned. Why didn’t he check the VAR before awarding the penalty to Portugal? That penalty was wrong. It should be reviewed. Even the second Goal against Ghana was an offside goal. @FIFAWorldCup no VAR pic.twitter.com/oA2szaDCUz