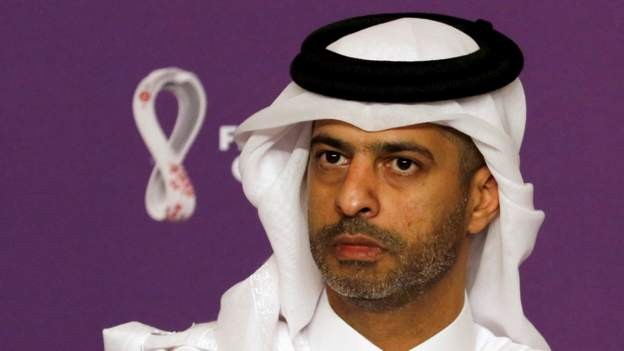 The chief executive of the Qatar World Cup has been criticised by human rights groups for saying "death is a natural part of life" when asked about a migrant worker's death at the tournament.

Football's world governing body Fifa said it was "deeply saddened" following the death of the worker during the group stages.

In an interview with Reuters, tournament boss Nasser Al Khater said he was "disappointed" at journalists' questions on the matter.

"His statement that deaths happen and that it's natural when it does, ignores the truth that many migrant worker deaths were preventable."

A Filipino national fell to his death while carrying out repairs at a resort used as a training base by the Saudi Arabian team, The Athletic reported.external-link

Qatar's treatment of migrant workers was one of the main controversies overshadowing the build-up to the World Cup.

The tournament's supreme committee said the worker was "not working under its remit" and the incident took place "on property not under its jurisdiction".

The matter is now being investigated by the Qatari authorities.

Fifa said it had been made aware of an accident and was in touch with the local authorities to request more details.

"This is something you want to talk about right now?" Al Khater said. "I mean, death is a natural part of life, whether it's at work, whether it's in your sleep.

"Of course, a worker died. Our condolences go to his family. However, I mean it is strange that this is something you want to focus on as your first question."

"This theme, this negativity around the World Cup has been something that we've been faced with.

Ella Knight, Amnesty International migrants' labour rights researcher, said: "Unfortunately, Mr Al Khater is mistaken when he says that every fatality is investigated. This is simply not true.

"We and others have been calling on the Qatari authorities to conduct such investigations on workers' deaths for years to no avail.

"Instead, they continue to simply write off vast numbers of deaths as being due to 'natural causes' despite the clear health risks associated with working in extreme temperatures.

"It goes without saying that the Government should be investigating this most recent tragic case, as well as the deaths of all others. Every single family who has lost a loved one as a result of their working conditions in Qatar deserves answers and remedy for their loss."

Human rights organisations and a number of football associations whose countries are involved in the tournament say they will "continue to press" Qatar and Fifa to establish a compensation fund for migrant workers and their families, as well as the establishment of a migrant worker centre in Doha.