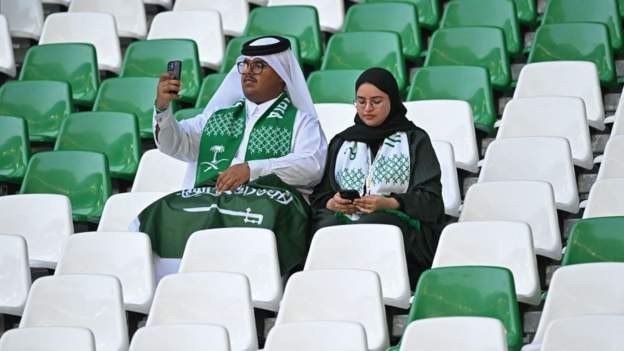 Fans in Saudi Arabia have been unable to watch all of the World Cup after a streaming service was blocked by the country's government.

Tod TV, owned by Qatar-based broadcaster beIN SPORTS, holds the rights to the tournament In Saudi with 22 matches free-to-air.

But 42 can only be watched via a streaming service, that was blocked an hour before the opening ceremony.

Saudi Arabia came from behind to beat two-time winners Argentina 2-1 in their opening match in what is one of the biggest shocks in World Cup history.

Tod has written to advertisers on its platform explaining that it is "experiencing an outage which is currently impacting" its service.

The service also sent a message to viewers saying the situation was due to "matters beyond our control".

Subscribers have complained on social media about the issue.

This comes nearly two years after Saudi Arabia and three other Arab states announced an end to a diplomatic dispute with Qatar. As part of the row, Qatar had filed a complaint against Saudi Arabia for blocking beIN and refusing to take action against alleged piracy of its content, which the Saudis denied. The dispute was resolved last year.

This week the Saudi Sports Minister told BBC Sport that Qatar had done an "amazing job" with the World Cup, and that it could help strengthen ties between the two countries.

"We're neighbours, everyone has issues and we have to overcome these issues and use such an event to showcase that people are willing to work together," he added.

The rulers of the two countries - the Emir of Qatar and the Crown Prince of Saudi Arabia - have appeared together at two matches.

BBC Sport has contacted Fifa and the Saudi Media Ministry for comment, while BeIN declined to comment.