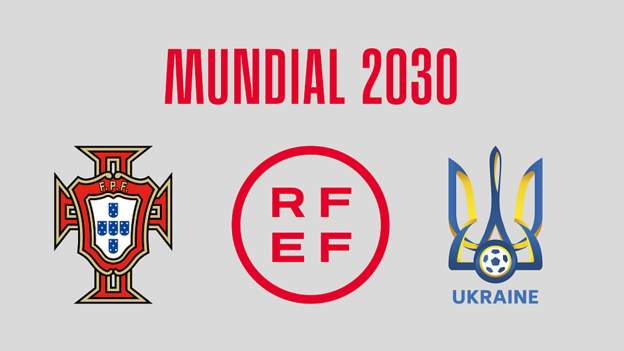 Ukraine has joined Spain and Portugal's bid to host the 2030 Fifa World Cup.

Representatives of the Spanish, Portuguese and Ukrainian football associations confirmed their plans at Uefa's headquarters on Wednesday.

Ukraine was invaded by Russia in February and the war has continued since then with thousands of troops and civilians killed and major cities suffering significant destruction.

Spain and Portugal originally announced a joint bid in June 2021.

"Our bid is not an Iberian bid any more, it's a European bid," Luis Rubiales, president of the Spanish federation (RFEF), said.

"I'm convinced that now our bid is much better than before. Football is universal and if it is capable of changing the life of people in so many ways it should also be used for doing good."

The three-way partnership has "unconditional support" from Uefa, European football's governing body, according to a statement by the Portuguese Football Federation (FPF).

"The example of tenacity and resilience set by the Ukrainian people is inspiring," the FPF said. "This proposal aims to contribute through the power of football to the recovery of a country undergoing reconstruction."

FPF president Fernando Soares Gomes da Silva said: "We are convinced that by 2030 we will have peace in Europe and that Ukraine will be able to host it in the best way possible."

The Spain, Portugal and Ukraine bid will compete against a joint South American proposal from Uruguay, Argentina, Paraguay and Chile, as well as a collaboration between Egypt, Greece and Saudi Arabia.

The RFEF said the addition of Ukraine to the bid would not lead to any changes to the planned 11 venues in Spain and three in Portugal.