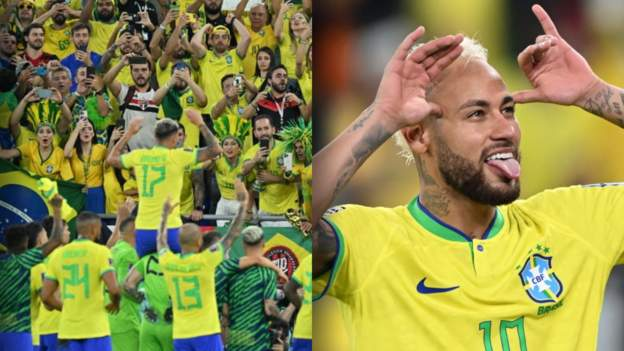 Carnival dancing, world-class goals, party tricks in abundance and thousands in yellow enjoying themselves - this was Brazil at their magical best.

We are used to seeing them in the knockout stages of World Cups but this was a treat - one of this tournament's most impressive performances that left those watching at Stadium 974 in Qatar dancing out of the ground.

It was street football from Rio de Janeiro brought straight to the Middle East - a legendary number 10 playing tricks, a juggling Richarlison scoring worldies - again - and a constant carnival sound coming from the thousands of supporters clad in yellow.

The Selecao are definitely here.

Real Madrid star Vinicius Junior and returning superstar Neymar both had their moments in the spotlight, while Richarlison kept up his quest to score the goal, or goals, of the tournament.

There were legends all around before kick-off as Ronaldinho's name was plastered across the backs of shirts and tributes to the great Pele, currently receiving treatment in hospital, were displayed in the stands.

And the return of Brazil's current star had fans chanting "Neymar, Neymar, Neymar" as he approached the penalty spot, ready to double their lead.

An eruption of noise, a dancing demonstration by manager Tite and a hug for injured defender Alex Telles by Neymar followed. Brazil were 2-0 up and there was more to come.

By half-time, as Tite's side led 4-0, social media had been sent into meltdown, Brazilians were partying on the sand at Copacabana beach and the players were shaking their hips as they danced down the tunnel.

The only people seemingly not enjoying it were the South Koreans.

View more on twitterAnd the winner is...

The dazzling feet of Richarlison were also on display.

The Tottenham striker was already in a league of his own when it came to the goal of the tournament after he had netted a stunning volley in the win over Serbia.

But there is no party without a Richarlison worldie at this World Cup.

So he juggled the ball on his head three times, flicked it on to a team-mate, ran on to a one-two in the box and coolly slotted home.

Haven't we seen that showboating before in Nottingham?

But that was the goal of the tournament officially in the bag.

But hang on... South Korea's Paik Seung-ho wasn't going to let Brazil have all of the fun when he smashed in 30-yard screamer.

A consolation for South Korea - but at least they had their moment on a night that will be remembered for football magic in Doha.

South Korea wanted more moments too, but Brazil goalkeeper Alisson pulled off several brilliant saves and was then substituted in the 80th minute to a standing ovation.

When the full-time whistle went, Brazil's players headed straight to their supporters behind the goal.

"I don't like this. People say it's their culture. But I think that's really disrespecting the opposition. I don't mind the first time and that jig, but then the manager was getting involved. I'm not happy with it."

No beach party for Keane then...

'Beautifully terrifying Brazil' - how you reacted on social mediaStrictly Come Dancing, you say?

Callum: This is very enjoyable! I thought Brazil should have started Martinelli today but Vinicius Jr has shown us why he is one of the best young talents around. Every player has put on a great performance so far.

Dharma: Brazil looks like the team to beat. Scary.

Tirzah: France vs Brazil final then?

MJ: After that first half, you can imagine Croatia are now booking flights home for straight after the game Friday night! Brazil are showing their masterclass against South Korea.

Alf Wilson: For all the people purring over Brazil, that late South Korea consolation goal has done me out of my first ever century in World Cup fantasy football. Thanks lads!