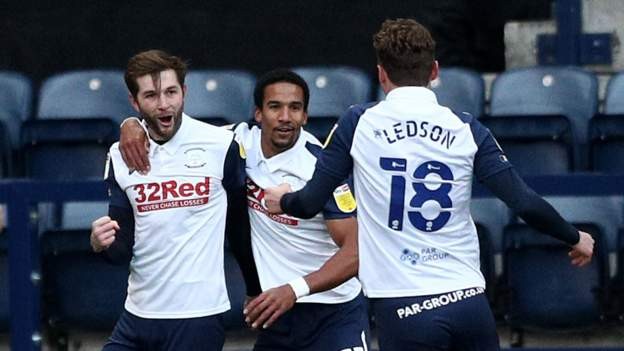 An 87th minute own goal from Jason McCarthy earned Preston North End a point and denied Wycombe their first win in six games.

Tom Barkhuizen put Preston ahead at Deepdale after 14 minutes and they held the lead until early in the second half.

But McCarthy made a mess of Scott Sinclair's cross and diverted the ball past Ryan Allsop to ensure the game ended in a draw.

But the reprieve didn't last long as in-form Lilywhites forward Barkhuizen scored his fourth goal in five games after pouncing on a mistake.

Josh Knight's header sold his goalkeeper short and the alert Barkhuizen reacted quicker than anyone else to nod it over Allsop for the opener.

Wycombe responded well and were making chances of their own, with Adebayo Akinfenwa going close with a header.

They went closer still when Knight saw an effort cleared off the line by Ben Davies and McCleary's follow-up went behind for a corner.

The Chairboys were back on level terms when Daryl Horgan spotted the run of McCleary and slid the ball through for the forward to fire emphatically into the roof of the net.

It got better still for Wycombe when Scott Kashket grabbed his fourth of the season, finishing well after Joe Jacobson's 25-yard free-kick came back off the post.

It looked like being enough to claim the three points before McCarthy turned the ball into his own goal under pressure from Jayden Stockley.

"I'm gutted but it's a positive to [be able to] say that after not getting three points away at Preston, even though we deserved it.

"Having said that, you can't concede two goals. The first one is really sloppy, the second one is very unlucky.

"I think we could have had a few more ourselves today, we had some real clear-cut chances but unfortunately we didn't stick them in. You've got to do that in the Championship.

"In the last two games we've been super competitive and I'm looking forward to what we can do at Barnsley."

Attempt missed. Alex Samuel (Wycombe Wanderers) header from the centre of the box misses to the right. Assisted by Garath McCleary with a cross.

Attempt missed. Emil Riis Jakobsen (Preston North End) right footed shot from the right side of the box misses to the right. Assisted by Declan Rudd.

Jack Grimmer (Wycombe Wanderers) wins a free kick in the defensive half.

Scott Kashket (Wycombe Wanderers) is shown the yellow card for a bad foul.

Alan Browne (Preston North End) wins a free kick in the attacking half.

Jack Grimmer (Wycombe Wanderers) is shown the yellow card for a bad foul.

Jayden Stockley (Preston North End) wins a free kick in the attacking half.

Joe Jacobson (Wycombe Wanderers) wins a free kick in the defensive half.