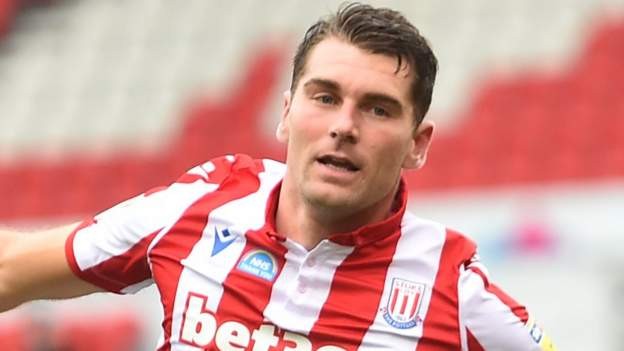 Wycombe Wanderers have made arguably their biggest ever signing by luring former Wales international striker Sam Vokes to Adams Park.

Vokes, 31, who starred in the European Championship semi-finals with Wales in 2016, has left Championship side Stoke City to sign an initial one-year deal, with the option of a second year.

He was unveiled on the pitch before the pre-season friendly with Leicester.

Wycombe have also signed defender Jack Wakely, who was on Chelsea's books.

Wakely, 20, who has signed a two-year deal at Wycombe, was released by the Premier League club this summer.

He played four times for Chelsea Under-21s in the Football League Trophy in 2019-20 and ended last season on loan with Brighton's youth team.

Vokes and Wakely could both make their debut for the Chairboys in the League One season opener against Accrington Stanley on Saturday, 7 August.

Jack Wakely joined Chelsea's academy as an under-nineVokes in Bucks

"Sam has been our number one target all summer," said Wycombe boss Gareth Ainsworth.

"This is the culmination of so much hard work from a lot of people around the club, and we particularly owe a massive thank you to our chairman Andrew Howard for his incredible effort to get the deal done.

"It's taken a lot of time, a lot of phone calls, a lot of late-night meetings, but we got there and it's a brilliant acquisition for this club.

"Sam's experience speaks for itself, with 64 caps for Wales, scoring in a European Championship quarter-final, winning promotion to the Premier League three times, and scoring a lot of goals in the top two tiers for Burnley over a seven-year period."

Vokes still had 12 months remaining on the contract he signed when he joined Stoke for an undisclosed fee as part of the deal that took Peter Crouch to Burnley in January 2019.

He is just six goals short of 100 in English league football with his nine previous clubs, starting as a 17-year-old at Bournemouth in 2006 before Mick McCarthy signed him for Wolves in May 2008.

He went out on loan to six different clubs in his four years at Molineux - Leeds United, Bristol City, Sheffield United, Norwich City, Burnley and Brighton before moving to Turf Moor on a more permanent basis in 2012.