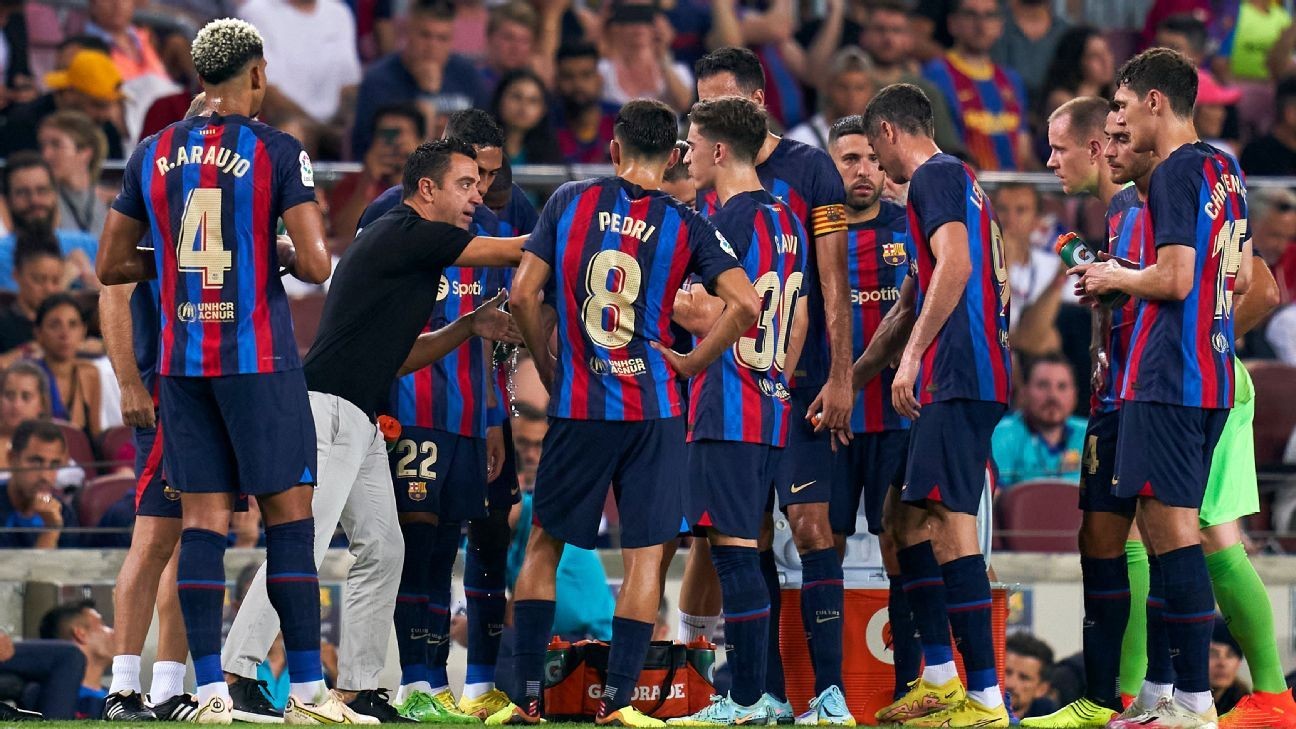 Xavi Hernandez says Barcelona still need to strengthen their squad after opening the season with a disappointing goalless draw against Rayo Vallecano at Camp Nou on Saturday.

Barca handed debuts to four of their five summer signings against Rayo, with Robert Lewandowski, Raphinha and Andreas Christensen all starting. Franck Kessie came on in the second half.

- Marsden: Barcelona's new faces fail to click as Lewandowski and Raphinha are shutout on debuts
- La Liga on ESPN+: Stream LIVE games and replays (U.S. only)
- Don't have ESPN? Get instant access

All four of them were registered with LaLiga on Friday after the club sold 24.5% of Barca Studios to take the total raised from asset sales this summer to over €700 million.

Jules Kounde has not yet been registered and won't be until Barca create more salary space, but the Blaugrana are pursuing further signings, with Marcos Alonso, Bernardo Silva and possibly another right-back all wanted.

"I've already said we have to keep strengthening and we have time until Aug. 31 [when the transfer window closes]," Xavi said in his post game news conference.

"But I don't want to use that as an excuse [for the Rayo result]. I understand the disappointment, expectations are really high. We will have to analyse the game, improve and keep believing in the model of play.

"Rayo defended well. It was harder for us to create [chances] than usual. It's a shame because we wanted to show the fans that we're on a good path. It's disappointing, but we ask for patience."

Barca are now operating at a ratio of 1:1 when it comes to signing players, per LaLiga rules. That means they can now spend whatever they save or make on fees or wage cuts.

To bring in more bodies, therefore, it is still necessary for other players to leave first. Midfielder Frenkie de Jong is wanted by Manchester United and Chelsea but sources have told ESPN he remains keen to stay at Barca.

The Dutch midfielder impressed as a second half substitute against Rayo and Xavi says he will play a key role if he stays but left the door open to a transfer.

"His role is not as a substitute, he is an important player, I have said that many times," Xavi stressed.

"He did very well coming on today -- like last week. I don't know what will happen in the transfer market, but if he stays, he will be very important for us. Especially with the attitude he has and his performances."

Barca had over 20 shots against Rayo but the visitors also had their moments, with home goalkeeper Marc-Andre ter Stegen making some important saves.

Pedri, Sergio Busquets, who was sent off for a second booking late on, Raphinha, Ousmane Dembele and Pierre-Emerick Aubameyang all had chances for Barca, who also had two goals rules out for offside.

One of them was scored by Lewandowski, a €45m signing from Bayern Munich, who couldn't mark his official Barcelona debut with a goal in front of a crowd of over 80,000.

"I am satisfied because he worked for the team, gave a hand for the high pressure and his control was very good when he was the solution in the build up," Xavi said of the Polish striker's display.

"But we needed more effectivity today, that was the main problem, but I am really happy to have him in the squad, he's helping the team.

"Today, Robert and everybody, we are upset because the result is not good, but we need to keep going, believe the process. It's a matter of time before he scores."