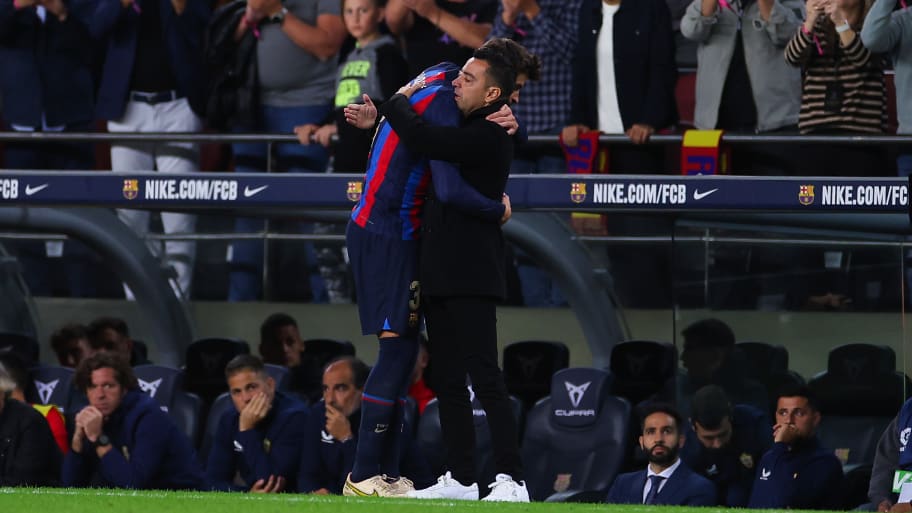 Barcelona manager Xavi was unable to call upon Gerard Pique for his final game at the club after the legendary Spanish defender was sent off despite being an unused substitute.

The 35-year-old was dismissed from Barca's 2-1 win over Osasuna after complaining to the referee about Robert Lewandowski's red card just after the half-hour mark.

The Polish striker was shown two yellow cards - much to the chagrin of Pique - but his absence didn't affect the outcome of the game; Pedri and Raphinha's second half goals enough to cancel out David Garcia's opener just six minutes in.

Speaking to the media after the game, Xavi has admitted that Pique - who was given an emotional farewell at Camp Nou on Saturday - would likely have come on a substitute because of the erratic performance of Andreas Christensen and an injury to Eric Garcia, but that obviously wasn't possible after his dismissal.

"I was going to count on him. Andreas lacked rhythm, Eric had discomfort... and I had thought he would play," Xavi admitted.

"But they sent him off as a result of the moment. We felt harmed, hence his reaction and that of others".

Xavi also bemoaned the decisions of the officials, but praised the character of his Barca side for pressing on to win despite being a man down.

"We feel harmed. These are very unfair decisions. We had everything against us, because of the goal against, which was a foul. Lewandowski's expulsion was doubtful... but we have faith, character, personality... the feeling of a team It's great.

"I've conveyed my conviction to the players. It's a golden victory".

This article was originally published on 90min as Xavi makes Gerard Pique admission after Barcelona career ends on low.