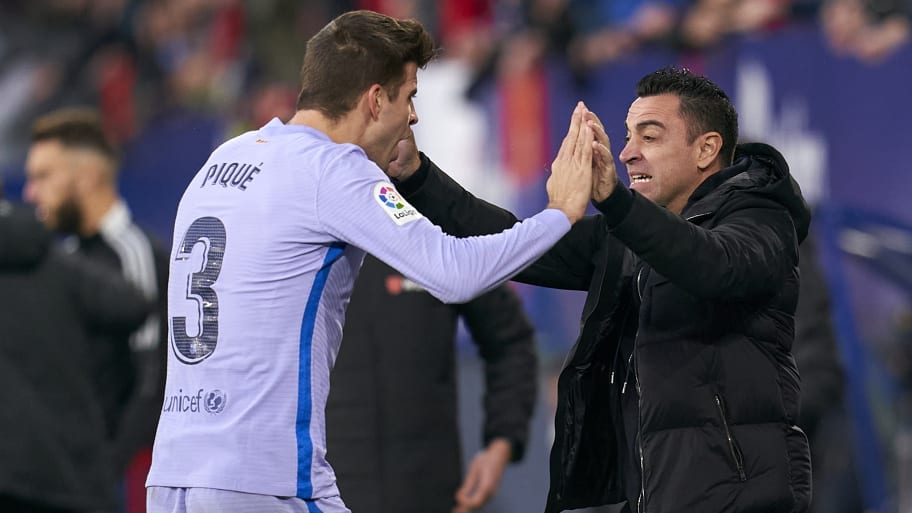 Xavi has heaped praise on Gerard Pique as he prepares to make his final appearance at Camp Nou as a player.

Pique has announced his imminent retirement from Barcelona, bringing an end to a tumultuous few months which have been full of reports of the Blaugrana's desire to move on from their highest earner.

The legendary 35-year-old has been Barcelona's fifth choice centre-back this season, even falling behind left-back Marcos Alonso in the pecking order, and he has now decided to hang up his boots before the World Cup break.

"He deserves all the praise from Barcelona fans," Xavi told a press conference. "The career that he has had...

"He's decided to put an end to his career. I understand the circumstances. He feels less important, less useful, and so it's normal to take this step aside. He demonstrates spectacular greatness by stepping to the side. He deserves all the praise and that Barcelona fans honour him for what he is, a club legend.

"Let the people cheer for Gerard, he earned it. He deserves everything for his extraordinary career. We have to make it a great day for the club. Without him, Barça loses leadership, commitment. He is one of the best centre-backs of this sport."

Xavi was then asked about his role in Pique's decision, conceding that his team selection will inevitably have played its part.

"We had a conversation before the season started. Obviously, a private conversation," he explained. "It has been one of the most difficult days of my coaching career, and now it's difficult too. He has been a teammate.

"I have great appreciation for him, but this has happened to all of us. It is difficult to manage. It's a massive thing for him as a person and a player to say that he will not continue.

"I don't know if I have been fair but I have been sincere and honest. He has been an example but I was honest with him and the circumstances have led to him putting an end to it. He is a winner and will continue to be wherever he goes.

"I just tried to be honest. In the end, a footballer always believes that the culprit is the coach if you don't play him. These are difficult situations to digest, but it's part of the job.

"Our relationship is the same as before. There is no bad relationship. I have to make decisions for the good of the team and the club. When you don't start someone who has been everything, it's never good, but nothing has broken between us."

"Let's see what priority there is. There is time, so we will plan with Mateu [Alemany], the president and Jordi Cruyff."

This article was originally published on 90min as Xavi reflects on 'sincere & difficult' discussions with Gerard Pique before retirement decision.