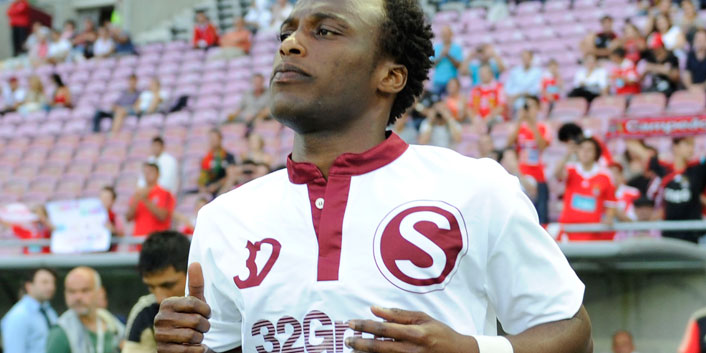 Ghana midfielder Ishmael Yartey has expressed his gratitude to coach Kwesi Appiah despite being dropped from the final squad for next month's World Cup qualifiers.

The Switzerland-based playmaker has vowed to work harder to return to the Black Stars in future after getting his first invite to the squad.

Yartey was part of the 30-man squad released earlier this month to prepare for the matches against Lesotho and Zambia with the next two weeks.

But after three weeks of training in Accra he was not named among the 24 players chosen to play the matches against Lesotho and Zambia.

The Servette player is grateful for the opportunity to train with the Black Stars and has vowed to work hard to return to the fold.

"I want to thank coach Kwesi Appiah for giving me the chance to be part of the squad. It was a great experience for me," Yartey told MTNFootball.com.

"I joined the squad to give my best but we will not all make the final squad. I understand the difficulty the coach was faced with, with all the excellent players in the team.

"All the players worked so hard and to my colleagues who made the final team I wish them good luck and I am sure they will do our country proud in the upcoming matches.

"My experience with the team has made me even more determined to return to my club and workÂ  harder so that I can get another chance in the team.

"The coach and his technical staff were so supportive and I thank them for giving me this priceless chance.

"My colleagues especially the senior ones - Sulley, Derek Boateng and the rest also warmly received me and the other new players with good heart.

"I desperately want to come back to the team so I want return to my club and work harder. The experience has made me even more determined to play for my country."

Yartey's excellent form in Switzerland with Servette led to call-up to the squad.

But the presence of other top players like Sulley Muntari and Kwadwo Asamoah as well as Christian Atsu means there will be too many players in the left winger position.