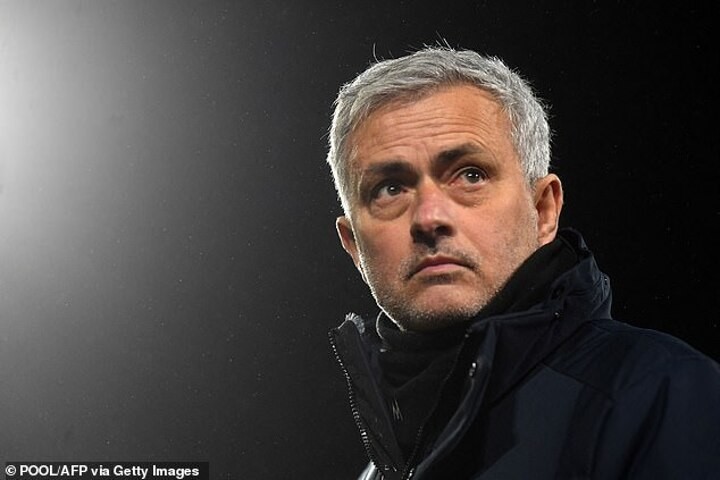 Jose Mourinho jokingly accused a reporter of being too negative towards Tottenham after the north Londoners recorded back-to-back wins with victory at Fulham.

Spurs beat the struggling Cottagers 1-0 on Thursday night thanks to Tosin Adarabioyo's first-half own goal - with Mourinho's men now five points behind fourth-placed Chelsea with a game in hand.

After beating Burnley 4-0 on Sunday, Tottenham have now won back-to-back Premier League games for the first time since November, but Mourinho was not too happy to hear that record being thrown back at him after the Craven Cottage win.

The answer to Mourinho's question is that Tottenham won just four away Premier League matches in the final 12 months of Mauricio Pochettino's reign - including none from January 2019 to the moment the Argentinian was sacked in November of that year.

Mourinho, meanwhile, has won eight Premier League away matches as Tottenham manager since replacing Pochettino just over 15 months ago - including Spurs' first four top-flight matches on the road this term.

Despite the positive start to the campaign, which saw Spurs top the table at the beginning of December, Tottenham's season unravelled with five defeats in six Premier League matches starting from the end of January.

Mourinho's men also exited the FA Cup at the fifth-round stage with a dramatic 5-4 extra-time defeat to Everton in the middle of that dismal run.

But the back-to-back wins comes at a perfect time for Spurs who face a challenging 10-day period.

After hosting Crystal Palace on Sunday night, Spurs then face Dinamo Zagreb in the Europa League last-16 on Thursday night before travelling to Arsenal the following weekend for a Premier League north London derby.

Mourinho was hesitant in declaring that Spurs are aiming for a top-four finish and maintained they are looking at one game at a time.

'That's the way we are going and after that is the Europa League. It's a knockout, we want to go to the quarter-finals.

'Let us go like that and of course good results help - people smile in a different way and let's see what we can do.'