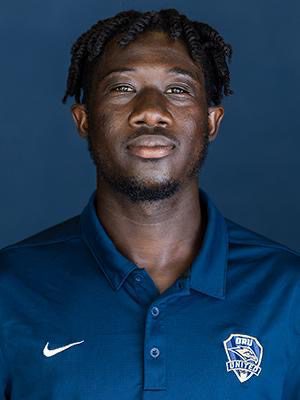 Young Ghanaian footballer Eugene Quaynor was killed in a horrific car accident in the United States on Wednesday.

According to Oklahoma police, the 23-year-old captain of the college men's soccer team at Oral Roberts University was killed when an accused drunk driver crashed into his car.

According to a news release from the Tulsa Police Department, Quaynor was stopped at a stop light shortly after 10 p.m. on Wednesday, Sept. 28 when an SUV rear-ended his car, pushing it through the intersection.

Quaynor’s car spun around, hit a wall and caught fire, police said. People nearby tried to help him get out — breaking the car’s windows with rocks — but the flames quickly engulfed the vehicle.

“Eugene was the epitome of the mission we strive for,” the university’s athletics department said in a statement on Sept. 29. “He was a leader on the field as a captain of the men’s soccer team and had a spirit-empowered heart ready to lead and impact the world for Jesus. His infectious smile will be missed.”

Quaynor previously played for the Phoenix Academy in Accra, Ghana, and the Flint City Bucks in Flint, Michigan, according to statements from both organizations.

He had spent the previous four seasons playing defence for Oral Roberts University.