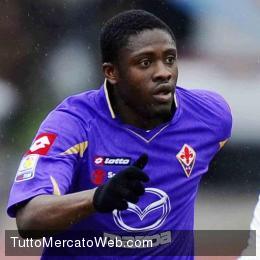 Ghana youth star Amidu Salifu made his full debut for Fiorentina in their 2-2 draw with Atalata in the Serie A on Saturday night.

The 19-year-old was handed a defensive midfield role by coach Delio Rossi at the Artemio Franchi.

He was highly impressive in the match and even made a scoring attempt but his shot was easy pickings for Atalanta goalkeeper Consigli in the 55th minute.

Salifu delivered a right footed shot from outside the box is saved in the centre of the goal.

However, he was replaced after 66 minutes by Houssine Kharja because of an injury he picked up in the 43rd minute.

"I am getting on well and I hope things will be fine for me before the break for winter," Salifu told GHANAsoccernet.com.

Salifu played for the Ghana Under-20 in the second leg of the 2011 final African Under-20 qualifier against Benin in Accra.