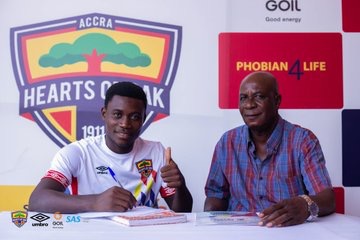 Ghana Premier League giants Hearts of Oak have handed youngster Mitchelle Sarpong an improved contract ahead of the upcoming season.

The Phobians have been handed a major boost ahead of the next season as Sarpong committed his future to the club.

The highly-rated youngster has been o of the standout of players in the Ghana Premier League since his promotion from the club's youth side.

The 18-year-old was promoted from the club's feeder side Auroras FC after an explosive performance last year.