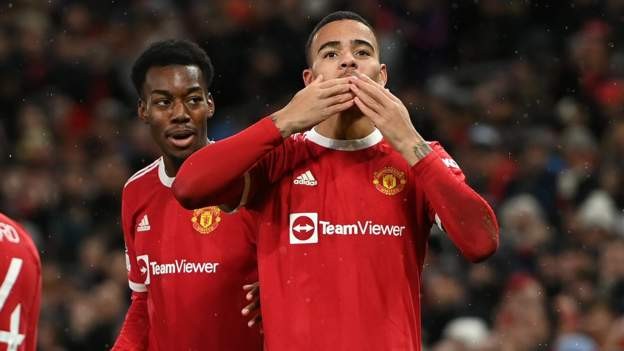 With qualification as group winners having been secured with a game to spare, interim boss Ralf Rangnick gave all 11 players who started the Premier League win over Crystal Palace a night off.

But, other than Greenwood, who brilliantly volleyed Luke Shaw's cross into the corner, it was not a night when United's fringe players made much of an impression.

A rare opportunity for Donny van de Beek only resulted in the Dutchman providing 19-year-old Fabian Rieder with the chance to equalise for David Wagner's men and Quentin Maceiras should have won it for the visitors but fired wide from an excellent position after finding himself unmarked in the box.

Rangnick introduced Robbie Savage's son, Charlie, for a first-team debut - something his dad never managed during his time as an Old Trafford junior - two minutes from time.

At the same time, Zidane Iqbal became the first British-born player of Asian heritage to make a senior appearance for the club.

The night did not end well for Aaron Wan-Bissaka, who had to be taken of on a stretcher after the final whistle.

Greenwood the star on a disappointing night

A place in Monday's draw is something of an achievement for United, who have only reached the knockout round five times since the 2011 final, when they were beaten by Barcelona, and on only four occasions since Sir Alex Ferguson retired two years later.

On this evidence, few will give them much hope of winning the competition for a fourth time, although there are a lot of big names for Rangnick to call upon when the action starts again next February.

Greenwood's latest goal means he has now scored eight in European competition - excluding qualifiers - for United, a record for any player for the club before their 21st birthday, overtaking Marcus Rashford.

Rangnick will want more from the youngster given the manager's preference to press high up the pitch, something which will only give his chances of breaking back into Gareth Southgate's England squad a lift.

Henderson with a point to prove

Of all the players given a starting spot by Rangnick, goalkeeper Dean Henderson had the most pressing need to impress.

Overlooked this season by Ole Gunnar Solskjaer after missing the start of the campaign, Henderson is desperate to play regularly to try to regain his England spot, and if January comes and he still finds himself on the bench, he is likely to seek a loan move.

A couple of dashes out of his box to make clearances and a decent save to deny Christopher Martins' effort represented a decent opening period until Rieder struck.

In fairness to Henderson, the fault was not his as skipper Nemanja Matic played a pass to Van de Beek in a dangerous position which the Dutchman, given a rousing reception by the home fans who feel he should be given more opportunities, failed to control.

Henderson was left exposed too often after half-time as United's second string found it an increasing struggle to keep their opponents at bay.

Maceiras should have scored in what was the last bit of action around Henderson's goal before the keeper was replaced by Tom Heaton, who was making his United debut nearly two decades after he first joined the club.

Attempt missed. Nico Maier (Young Boys) left footed shot from outside the box is close, but misses to the right.

Anthony Elanga (Manchester United) wins a free kick in the defensive half.

Teden Mengi (Manchester United) wins a free kick in the defensive half.

Attempt missed. Vincent Sierro (Young Boys) right footed shot from the centre of the box is high and wide to the left. Assisted by Meschak Elia.

Attempt missed. Jordan Lefort (Young Boys) right footed shot from the left side of the box is high and wide to the right. Assisted by Vincent Sierro.

Shola Shoretire (Manchester United) is shown the yellow card for a bad foul.

Meschak Elia (Young Boys) wins a free kick in the attacking half.

Shola Shoretire (Manchester United) wins a free kick in the defensive half.