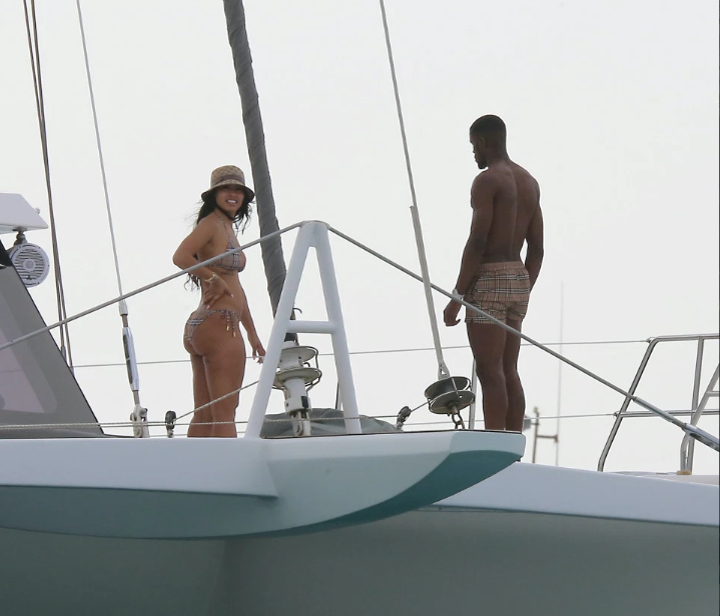 Zaha has made the most of his winter breakwith a Valentine's trip to Barbados with his stunning girlfriend Paige Bannister.

With Crystal Palace now getting some time off, the 27-year-old took full advantage and whisked Paige away to the balmy Caribbean island.

Palace's mid-season holiday came at a perfect time for the couple as  Zaha would normally be in action on Valentine's Day.

The Ivory Coast international has been dating Bannister since 2016, when he was spotted with the former University of Westminster student outside her hall of residence in Wembley.

And in the holiday snaps, the pair can be seen relaxing on the beach before zooming around on a jetski.

They then chilled on a yacht in the glorious Caribbean sunshine.

Zaha happily shared pictures of his gorgeous girlfriend on his Instagram story.

In one picture she can be seen posing for the camera on a sun lounger.

While in another, the footballer poses for a selfie while shy Bannister covers her face.

But she went on to find true love with the Selhurst Park icon.

The duo were photographed on the red carpet at the GQ Men of the Year awards back in September.

But since then Zaha has cut off his trademark locks.

Zaha, known best for his silky dribbling skills on the pitch, is also incredibly charitable off it.

The generous star donates ten per cent of his Palace wages to help those less fortunate than him.

Zaha, who will be back in action next Saturday when 14th-placed Palace host Newcastle, told the E&H Foundation:"I give a tenth of my salary to charity every month so in terms of giving back, I do my best.

"That's not just charities here, it's charities in the Ivory Coast too.

“My mum makes sure of it as soon as the end of the month comes. I do that as my good deed to help.”