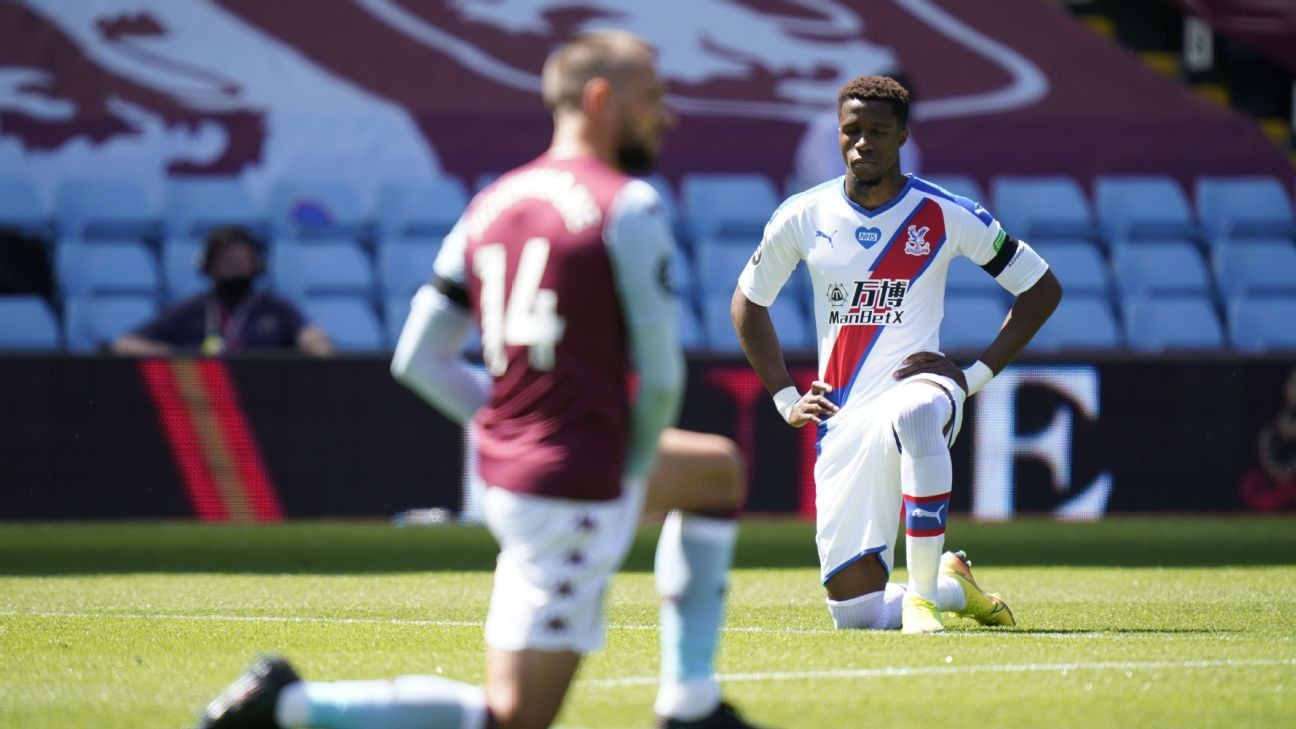 Wilfried Zaha took a knee in support of the Black Lives Matter movement before the game against Aston Villa on Sunday. Photo by TIM KEETON/POOL/AFP via Getty Images

Crystal Palace winger Wilfried Zaha has said people of all ages need to know that "you cannot hide behind social media" after the West Midlands Police arrested a 12-year-old boy for sending him racist messages online.

Zaha, 27, shared screenshots of the messages before the team's 2-0 loss against Aston Villa on Sunday.

"People need to understand that whatever your age, that your behaviour and your words come with consequences and you cannot hide behind social media," Zaha said in a statement on social media.

"It is important social media platforms do as they did yesterday and seek out these individuals and remove them. This is not the first time I have received messages like this, nor am I the only player to receive messages like this -- it happens every day."

The winger thanked the police for their swift action and the public for their support but said more needed to be done to combat racism.

"It is not enough to be disgusted by these messages I received and move on," he added.

The messages received by Zaha were roundly condemned by Crystal Palace and the Premier League.

"It is very saddening on the day of a game that a player wakes up to this cowardly and despicable abuse," Palace manager Roy Hodgson said on Sky Sports.

"I think it is right that Wilf made people aware of it; I don't think it is something he should keep quiet about.

"I think it is very good that our club, Aston Villa and the Premier League are doing everything they can to find out who this despicable individual is and one can only hope that they will get identified and they will get called to account and they will pay for these actions.

"There is literally no excuse; there is no excuse at all."

A Premier League statement read: "This behaviour is completely unacceptable and the Premier League stands alongside Wilfried Zaha in opposing this, and discrimination in any form. There is #NoRoomForRacism, anywhere.

"We will continue to support players, managers, coaches and their family members who receive serious discriminatory online abuse.

"Through our dedicated reporting system we can take immediate action on cases like this."

McGoldrick posted a screenshot of the message he received with the caption "2020 and this is life" after he scored twice against Chelsea on Saturday.

"As a club we will support David McGoldrick and will do all we can to find the perpetrator of this disgusting message," the club said in a statement on Twitter.

"We will work with the relevant authorities to ensure the person behind this post is brought to justice.

"This cannot continue. Something needs to change."