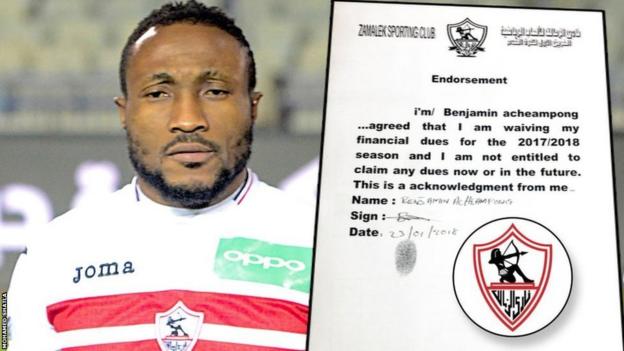 Former Asante Kotoko striker Benjamin Acheampong has revealed how he was duped into signing a deal that waived his salary at Egyptian giants Zamalek.

The 30-year-old had joined the five times CAF Champions League winners in 2017, but his stay at the club was hampered by several off-the-field issues forcing him to request a loan to Petrojet after just 11 months.

It was at Petrojet that he was asked to sign a deal that renounced his salaries at Zamalek.

"This is not right - this is what I do to feed my family," he told BBC Sport Africa. "They can't treat people like animals. We are humans and we came here to work."

"Nobody would do that," said Acheampong. "The only thing I (knowingly) signed was that Petrojet would pay me the half-season I was going to play."

Acheampong reported the club to the Court of Arbitration for Sport for "immoral", "intimidating" and "merciless" behaviour.

After several months, CAS ordered the club to pay the former Wa All Stars player the monies owed him, but the striker is yet to receive a dime from the Egyptian club.