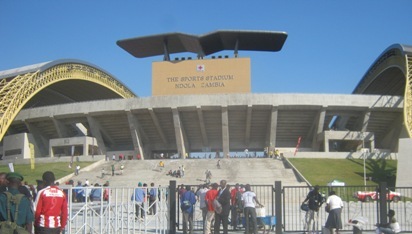 Zambia captain Chris Katongo is expecting a win over Ghana to make fresh history at the new Levy Mwanwasa Stadium.

The African champions host the Black Stars in a repeat of the semi final clash at the 2012 Nations Cup in the 2014 World Cup qualifiers at the newly built stadium in Ndola on Saturday.

Aside beating Ghana to open the 45000 capacity stadium in grand style, the Chipolopolo also need the win to restore hopes of their first World Cup berth after their shocking opening day defeat to Sudan.

And skipper Katongo who is expecting a packed and exciting crowd on Saturday says making history at their new ground serves as extra motivation for his team though mindful victory over Ghana will not come easy.

â€œWe are all excited that we will play at the new stadium on Saturday," he said.

"We are just as excited as our fans. We can't afford to lose our first match in a new stadium.

â€œOur motivation is to win because a loss will be bad for history books. We don't want people to say we lost our first match at Mwanawasa Stadium. A win will mean a lot for all of us as a nation.â€

"But Ghana is a big team and we have a lot of respect for them. We defeated them at the semi-final stage of the Africa Cup of Nations so they already know what they are up against. They were wounded by that loss so they will come here to revenge."

The two giants of African football have never played each other in World Cup qualifying matches but they have played each other four times in the Africa Cup of Nations tournaments in 1978, 1992, 1996 and 2012 with each team recording two wins.

There have been two friendlies between the two teams the most recent being the match that was played in England on 12th August 2009 and finished 4-1 in favour of the Black Stars.

In 1988 Zambia defeated Ghana 2-1 on aggregate over a two-leg third round qualifying match for the Seoul Olympics.

Overall, the two teams have previously played each other eight times with each team registering four wins but in the process, Zambia have scored nine goals to Ghana's eight.