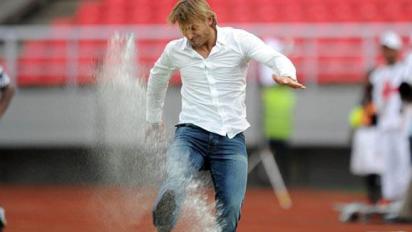 The turmoil in Zambia's camp escalated on Wednesday just three days before they play Ghana after coach Herve Renard threatened to quit claiming he is owed six months pay.

This comes just two days after the Frenchman clashed with the country's sports ministry over the travel arrangements for their game against Sudan.

The Chipolopolo are already reeling from their 2-0 defeat at the hands of Sudan and their troubles ahead of their revenge clash seems unending.

Renard told French sports daily l'Equipe that he was getting frustrated with his situation as coach of the 2012 African champions.

â€œI have not been paid for six months. After the Africa Cup, I took the decision to remain with the group, despite other big offers. I planned to go to the World Cup. Thatâ€™s life, Iâ€™ve learnt my lesson,â€ Renard said.

Renard was re-appointed as Zambia coach in November last year after taking over from his successor Dario Bonetti of Italy, a year and a half after leaving the team in April 2010 to take up a luctraive two year deal with Angola that lasted just five months.

â€œThere is an incredible lack of respect and consideration. Enough is enough. If nothing is settled before the end of June, I am leaving,â€ the Frenchman said.

His latest revelations have shuttered an image of Camelot that has been swirled around Zambia since their recent Africa Cup triumph.

Furthermore, the news does very little for Zambia with just 72 hours before Chipolopolo host Ghana in a crucial 2014 World Cup Group D qualifier in Ndola.

The game comes a week after Zambiaâ€™s embarrassing 2-0 defeat in their opening Group D match away to Sudan on June 2.

When contacted by MTNFootball.com over the story, Renard said he was firmly focused on Saturdays clash against the Black Stars.

"Concentrate on Saturday (s) game," was Renard's short and sharp reply from Ndola where the team is camped.