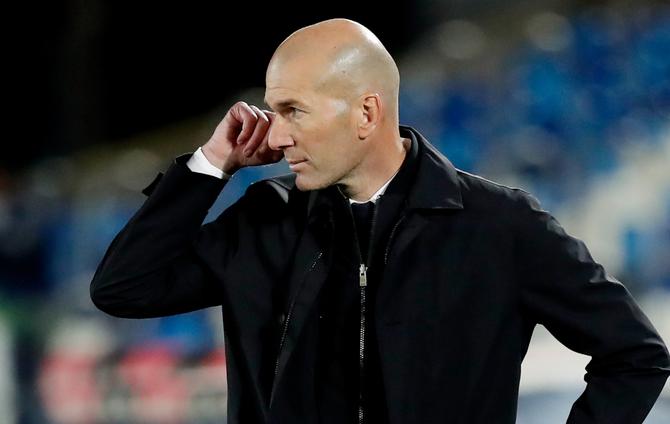 Zinedine Zidane does not think 2020-21 will automatically be considered a "bad season" if Real Madrid fail to successfully defend their LaLiga title.

A 2-2 draw at home to Sevilla at the weekend left Madrid two points adrift of leaders Atletico Madrid with three games to go, the stalemate meaning title success was no longer in their hands.

They go to Granada on Thursday having beaten the Nazaries in 17 of their 18 LaLiga meetings, that sole defeat coming in 2013 as a result of the only own goal Cristiano Ronaldo has ever scored in Europe's top five leagues.

Their run of 11 successive league wins over Granada is their best current winning streak over a single opponent in LaLiga.

If Atletico beat Real Sociedad on Wednesday, a shock defeat for Madrid will effectively end their title hopes as they will be five points behind with two games to go.

Zidane is not losing faith, though he does not think it can be deemed a poor campaign even if they do not win LaLiga.

"Everything can happen," he told reporters. "We can win it just like we can lose it.

"The most important thing is to give everything and how we act on the pitch. We've played good games and the season is long.

"I am not going to say that it is a bad season, because that's when you don't give everything on the pitch.

"2017 was a phenomenal season and we could have lost in the last game. The most important thing is what you can control, and then whatever happens will happen."

The focus after that Sevilla draw was on the officiating, as Zidane publicly criticised referee Juan Martinez Munuera for giving a penalty against Eder Militao for handball.

The infringement was brought to the referee's attention by a VAR review, his decision to bring play back subsequently robbing Madrid of a penalty of their own at the other end after Karim Benzema had been brought down by Yassine Bounou.

Zidane was not prepared to get into the discussion again, accepting things could get "messy" if he did.

"I'm not going to get into the polemics. Things should be clear to everyone," he said. "The VAR will always help to improve football but specific plays must be clarified.

"In the end, everyone does their job. I'm not going to talk about these things anymore. I trust football.

"We will do our job and the referee his. I'm not going to say something because it makes a mess. We are going to control our work."