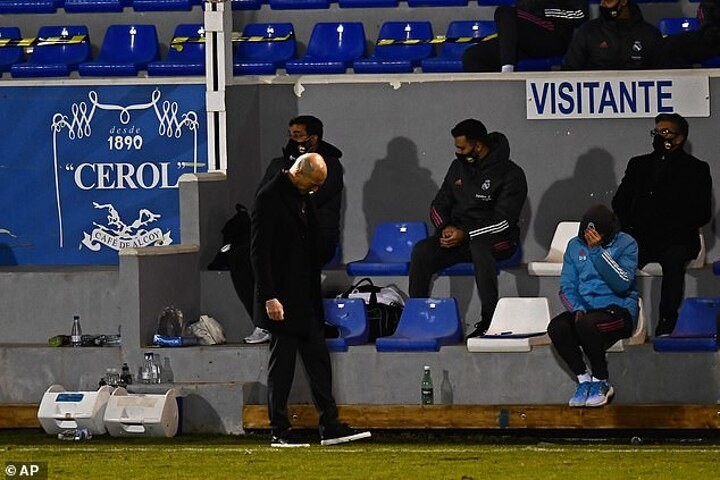 Zinedine Zidane admitted his job was back on the line after a third division team with only ten men dumped his Real Madrid side out of the Spanish Cup at the last-32 stage.

‘There is always talk whenever we lose,’ said Zidane after the 2-1 cup humiliation. ‘I assume responsibility and what has to happen will happen. I am very calm. The players want to win and they give everything to make that happen but sometimes it goes differently.’

It does not usually end well for Real Madrid coaches who oversee Copa del Rey embarrassments.

When they were knocked out at this stage of the competition in 2008 by another third-tier outfit Real Union Bernd Schuster did not make it until the end of the season. And a year later when Madrid met with the same fate losing to Alcorcon it was the end of Manuel Pellegrini.

Zidane has three Champions Leagues and two league titles in the bank but this will still be hard to be very hard to live down - and it does not help him that if Atletico Madrid win on Thursday in La Liga, Madrid will be seven points off the pace for the title too.

‘If we score the second goal then it’s another game,’ added Zidane. ‘But that is football. Their keeper made two or three very good saves and the ball just did not want to go in. But I must take responsibility.’

Asked if it was an embarrassment, Zidane said: ‘No. We are expected to win because they are a third tier side but these things can happen in football. There is no shame. We are just going to keep working and not be driven crazy by this.’

Alcoyano were going crazy post-game. Juanan, who got the winning goal said: ‘There is a bonus for the cup but we will have to renegotiate it.’

His president Antonio Justicia soon put him straight: ‘There was no bonus. No one expected this!’

Marca did not take long to set-up the first fan poll and 65 per cent of the first 29,000 votes said it would be best if Zidane did not continue. One Marca editorial headlined: ‘This could be the end of Zidane’.

The coach will have no shortage of defenders in the coming hours, however. The players will take the blame and many will point to Zidane being justified for not having played some of them more this season.

Mariano Diaz and Alvaro Odriozola have been given scarce minutes but both the centre-forward and the full-back showed why that might be. Vinicius and Isco also missed his chance to make a statement.

Those defending Zidane will point to the penalty not awarded Militao on 89 minutes and also on the competition simply being a lot harder for the big teams now. Two-legged ties were scrapped ahead of last season and games are now played at the home of the smaller side.

When Madrid lost to Real Union in 2008 they lost the first leg 3-2 and although they won the second at the Santiago Bernabeu 4-3 they went out on away goals.

In the game not fondly remembered by Madrid fans as the ‘Alcorconazo’ a year later Real were beaten 4-0 by Alcorcon in the away leg and only won the home leg 1-0. This time there is no second leg.

The empty tiny 4,850 El Collao stadium on Wednesday night had a ghostly feel to it as the Spanish champions’ made their cup exit. Zidane has never won this competition with Real Madrid neither as a player nor a coach.

The fact that he has won all of the others will save him from the usual fate.