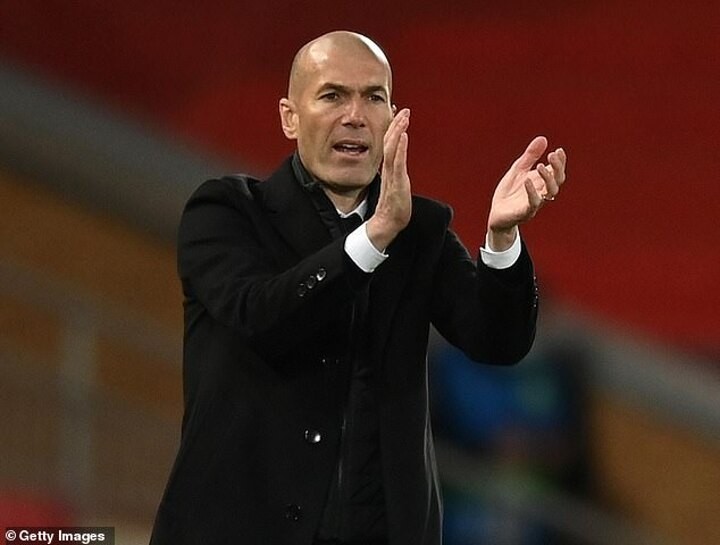 Zinedine Zidane's stellar work at the helm of Real Madrid has been lauded by BT Sport pundits Rio Ferdinand and Steve McManaman.

Los Blancos' iconic former talisman took charge of the club between 2016 and 2018 before returning for a second spell - and has already steered them to 11 trophies.

And, having also guided his team through to the Champions League semi-finals once again at the expense of Liverpool, Zidane was the subject of fulsome praise.

'This guy has an unbelievable knack,' Ferdinand said. 'He's not been around that long and has done it in a short space of time.

'He's come in and just hoovered up trophy after trophy, the big ones. Three Champions League trophies as a manager? It's phenomenal.

'He doesn't have much to say, he never had much to say as a player. He let his football do the talking. He's very much the same in management.

'He hasn't got a lot to say, he's not prickly with anyone really. He's very much about getting the job done and he does it immaculately.

'He just gets to a final and he just understands how to win. That's a unique position to be in.'

Zidane's team managed to protect their 3-1 advantage on Wednesday night and will next take on Chelsea as they aim for another Champions League crown.

The Frenchman has tasted success in the continent's elite club competition on no less than three occasions, but McManaman also says he doesn't get enough credit.

He said: 'He's done an incredible job. If it was any other manager we'd be falling over ourselves, applauding these people.

'The fact that he's so cool, the fact he doesn't want plaudits, the fact he's nice and relaxed, people don't think he's a tactician, but actually he is.

'He does his homework, he knows how to play. They knew where Liverpool's weaknesses were. He's great at his job.